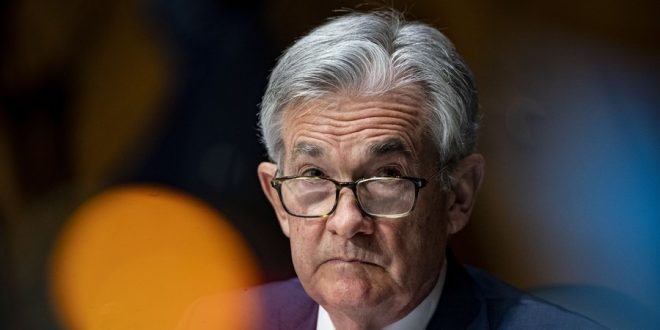 Washington, US Federal Reserve Chairman Jerome Powell said on Wednesday that “it is not time yet” to start talking about tapering the central bank’s asset purchase program despite a strengthening economic recovery.

“We’ve said we would let the public know when it is time to have that conversation. We said we would do that well in advance to the decision of tapering,” Powell said at a virtual press conference after the Fed concluded a two-day policy meeting, Xinhua news agency reported.

“In the meantime we’ll monitor progress toward our goals… it will take some time before we see substantial further progress,” he said.

Powell noted that the US economic recovery “remains uneven and far from complete,” while it has progressed more quickly than generally expected.

“For the economy as a whole, payroll employment is 8.4 million below its pre-pandemic level. The unemployment rate remained elevated at 6 per cent in March, and this figure understates the shortfall in employment,” he said.

In a statement after the Fed meeting, the central bank said that indicators of economic activity and employment “have strengthened” amid progress on vaccinations and strong policy support.

“The sectors most adversely affected by the pandemic remain weak but have shown improvement,” the statement said, adding inflation has risen, largely reflecting transitory factors.

The central bank also acknowledged that the ongoing public health crisis “continues to weigh” on the economy, and risks to the economic outlook “remain.”

The Fed pledged to keep its benchmark interest rates unchanged at the record-low level of near zero, while continuing its asset purchase program at least at the current pace of $120 billion per month until the economic recovery makes “substantial further progress.”

“With risks to the outlook remaining, the meeting statement again indicated that the FOMC (Federal Open Market Committee) will need to see outcomes consistent with its goals, not just forecasts. That will keep the Fed in a holding pattern for months to come,” Sarah House and Michael Pugliese, economists at Wells Fargo Securities, wrote Wednesday in an analysis, referring to the Fed’s policy-making committee.

“Powell left no doubt in his press conference that it is not yet time to begin discussing the tapering of the Fed’s asset purchase program. The Fed will remain quite accommodative in its policy stance even as it signals a robust expansion and declining unemployment,” echoed Joseph Brusuelas, chief economist at accounting and consulting firm RSM US LLP.

Diane Swonk, chief economist at Grant Thornton, a major accounting firm, believed that the Fed still needs to see “much more improvement in employment” before it considers a discussion about a potential taper.

“The Fed has decided it is more willing to risk a bit of overheating than derail a burgeoning boom. We need a boom to recover what was lost to the crisis, and get back to our pre-pandemic trend,” Swonk wrote in an analysis.

As the US economy recovers strongly from the pandemic, the Fed is likely to announce that the central bank will begin tapering asset purchases before the end of the year, according to a survey of 49 economists.

About 45 per cent of the economists expect the Fed to announce tapering in the fourth quarter while 14 per cent see that happening in the third quarter, the survey showed.

The Fed meeting came as US President Joe Biden is expected to announce a $1.8-trillion package to expand the US social safety net on Wednesday night, on top of the $2-trillion infrastructure investment plan unveiled weeks ago and the 1.9-trillion-dollar relief package enacted in March.

The massive fiscal support, which is expected to help fight the pandemic and bolster the ravaged economy, could also lead to an overheated economy, inflationary pressures, ballooning federal debt and rising interest rates, economists have warned.

Powell reiterated at the press conference that if inflation picks up in a more sustained way, the Fed will be prepared to use its tools to deal with it.

“If we see inflation moving materially above 2 per cent in a persistent way that risks inflation expectations drifting up, then we will use our tools to guide inflation and expectations back down to 2 per cent. No one should doubt that we will do that,” he said.