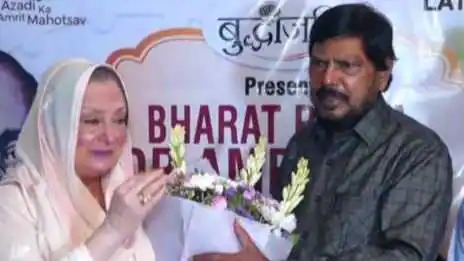 Veteran actor Dilip Kumar, widely known as the ‘Tragedy King’ was one of the finest and greatest actors that we have in Hindi cinema. In July, last year, he died due to prolonged illness at the age of 98.

On Tuesday, at an event, the late actor was conferred with the Bharat Ratna Dr Ambedkar Award. Veteran actress and his wife Saira Banu received the prestigious award from Union Minister Ramdas Athawale on behalf of her late husband.

A video of the veteran actress breaking down in tears is doing rounds on the internet.
Talking to the press at the event, Saira said that she feels Dilip is still close to her and watching everything. Saira said, “It should happen because Dilip Sahab has been the ‘Kohinoor’ for Hindustan. So ‘Kohinoor’ should definitely receive a Bharat Ratna.” She repeated, “He’s still here. He is not in my memories, I believe it’s the truth that he is here with me at every step, because this is how I will be able to live my life. He is with me, will always be here as my pillar of support- my Kohinoor.”

For the unversed, late actor Dilip Kumar was known as the Tragedy King due to the portrayal of a broken lover in several films through the 1950s, including the Bimal Roy classic, Devdas in 1955. He was also considered as one of the greatest actors in the history of Hindi cinema, as he holds the Guinness World Record for winning maximum awards by an Indian actor.