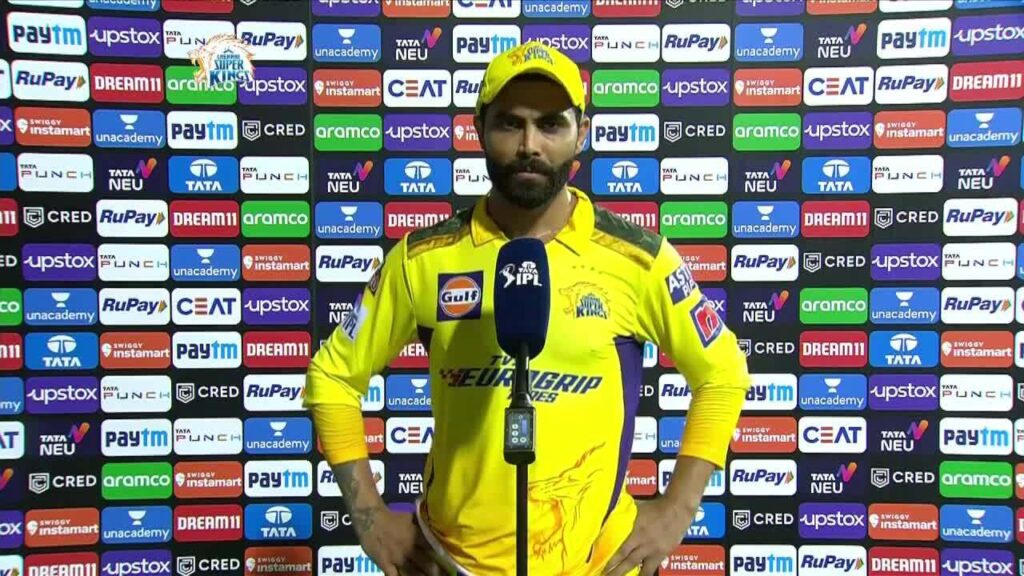 Navi Mumbai : Chennai Super Kings skipper Ravindra Jadeja said his team was confident of its chances in the close encounter with Mumbai Indians because the “great finisher of the game was there” to seal the victory for them in an IPL 2022 match, here.

Jadeja was referring to his predecessor Mahindra Singh Dhoni, one of the best finishers the game has seen so far, who guided CSK to victory with a late flourish, hitting 28 not out off 13 balls to seal a three-wicket win. Jadeja said Dhoni has proved that he can still finish the game.

After pacer Mukesh Choudhary’s sensational bowling performance (3/19) helped Chennai Super Kings restrict Mumbai Indians to 155/7 despite a fighting half-century by Tilak Varma (51 not out off 43), CSK were in trouble as they got off to a poor start but managed to reach the last over needing 17 runs.

Dwaine Pretorius, who helped Dhoni drag CSK towards victory with a 22 off 14 balls, was trapped leg-before off the first ball of the final over by Jaydev Unadkat. DJ Bravo came to bat next and took a single in the second ball of the over and Dhoni hit Unadkat for 6, 4, 2, 4 in the next four deliveries to seal victory for CSK.

“Actually we were very tense, the way the game was going, but at some stage, we knew that the great finisher of the game was there and if he played to the last ball, he can definitely finish the match. He showed the world that he’s still here and he can finish the game,” Jadeja said during the post-match ceremony at the D.Y. Patil Stadium here on Thursday.

Jadeja, who took over the captaincy from 40-year-old Dhoni just before the start of IPL 2022, also highlighted the role played by senior players Ambati Rayudu and DJ Bravo in the team’s victory.

“We have plenty of experience in our team so they know when to perform and what to do. So if we’re not winning the game, still we look to be calm and relaxed,” said Jadeja.

The CSK skipper said that his team needs to still work on its fielding and catching. “We need to do some work on our fielding and take catches because we can’t keep dropping catches in every game,” he said. On Thursday, Jadeja dropped two catches while Dhoni missed a stumping.