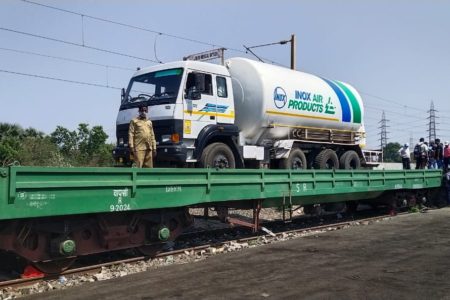 New Delhi: In a big relief to the people of Delhi, the Indian Railways has said that one Oxygen Express will arrive in the national capital with 120 MT of medical oxygen on Sunday afternoon.

Northern railway spokesperson Deepak Kumar said that one container train with six cryogenic liquid oxygen containers loaded over BLC wagons started from Durgapur to Delhi at 2 p.m. on Saturday and is expected to reach Tughlakabad ICD on Sunday afternoon i.e. at around 1 p.m.

Several hospitals in the national capital have been sending SOS to the city government over the scarcity of medical oxygen. On Saturday at least 12 people including a doctor died due to lack of oxygen at Batra hospital in south Delhi.