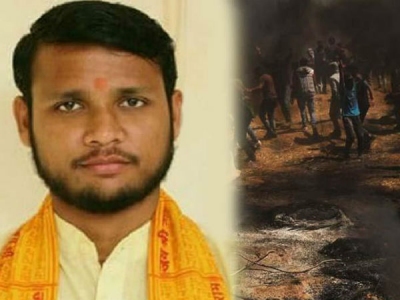 Bulandshahr: Yogesh Raj, the main accused in the 2018 Bulandshahr violence in which two persons, including police inspector Subodh Kumar Singh, were killed, has won the zila panchayat election in the district.

He was on bail while he was contesting the elections.

“Earlier I have worked with many organisations but for some work such as farmers’ issue, pension for widows, etc you have to enter politics. You cannot complete this work without being a politician. I had contested from ward number 5 and won by 2,150 votes,” Yogesh Raj told reporters.

Talking about the 2018 violence, he said that two people had died in the incident but he has not been charged with their murder.

“In Syana violence, two people died and I express my condolences to both of their families but I am just accused of instigating the mob and I am not accused of murder,” he said.

The villages of Chingrawati, Mahav and Nayabans were the epicentre of the violence in 2018. A mob had gone on the rampage on December 3, 2018, after a cow’s carcass was found in a sugarcane field near Mahav village of Syana in Bulandshahr.

Inspector Subodh Kumar Singh, posted at Syana police station, was killed in the attack. A youth, Sumit Kumar, also lost his life in the violence and the Chingrawati police outpost had been set on fire.