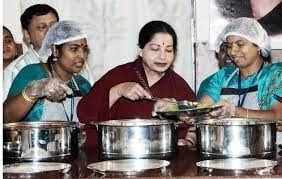 The AIADMK tweeted a video of three men and a boy removing banners kept at the Amma Canteen – the subsidised canteen launched by AIADMK government where idli is priced at Re 1 and plate of sambar rice is priced at Rs 5.

Three women were also seen in the video standing silently the happenings.

The AIADMK led alliance had campaigned that law and order will be a casualty if DMK comes to power and there will be land grabbing and other issues.