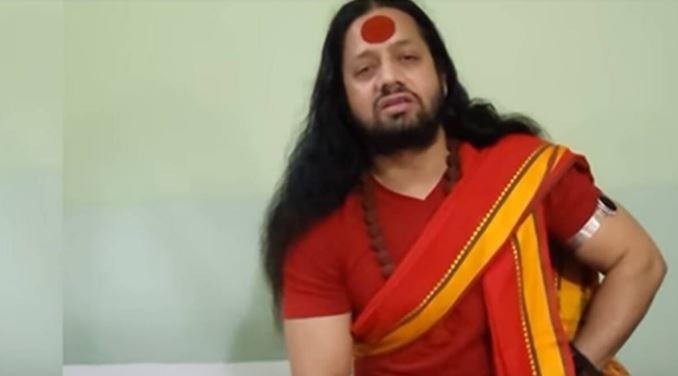 Bhopal : Religious leader Kalicharan Maharaj has been charged with sedition after he was arrested from Madhya Pradesh early on Thursday for making derogatory remarks against Mahatma Gandhi at an event – ‘Dharma Sansad’, in Chhattisgarh capital Raipur.

An FIR against Kalicharan was filed at Tikrapara police station in Raipur by a Congress leader Pramod Dube, who was also present at the ‘Dharma Sansad’.

“He (Kalicharan) has been booked under section 505 (2) (creating and promoting enmity hatred) and section 294 (obscene act at place) of the IPC. On the basis of investigation, we have also included charges under section 153 A (1), 153 B (1) etc of IPC,” the Chhattisgarh police said in a statement.

“He (Kalicharan) was staying at a rented accommodation near Bageswar Dham, 25 km from Khajuraho in Madhya Pradesh. Raipur police arrested him at 4 a.m. on Thursday,” a police officer said.

Kalicharan, who was a guest at the ‘Dharma Sansad’ organised in Raipur on December 25-26, allegedly abused Mahatma Gandhi, and praised his assassin Nathuram Godse.

Kalicharan’s arrest by Chhattisgarh police, however, has led to a spar between the governments of two neighbouring states — the BJP-led Madhya Pradesh, and the Congress-led Chhattisgarh government.

Madhya Pradesh Home Minister Narottam Mishra called Chhattisgarh police’s action a breach of inter-state protocol and has directed the top cop of the state to seek a clarification from the Chhattisgarh DGP.

However, Chhattisgarh Chief Minister Bhupesh Baghel justified the police action, saying: “No rules were violated. Action was taken as per the prescribed guidelines.”