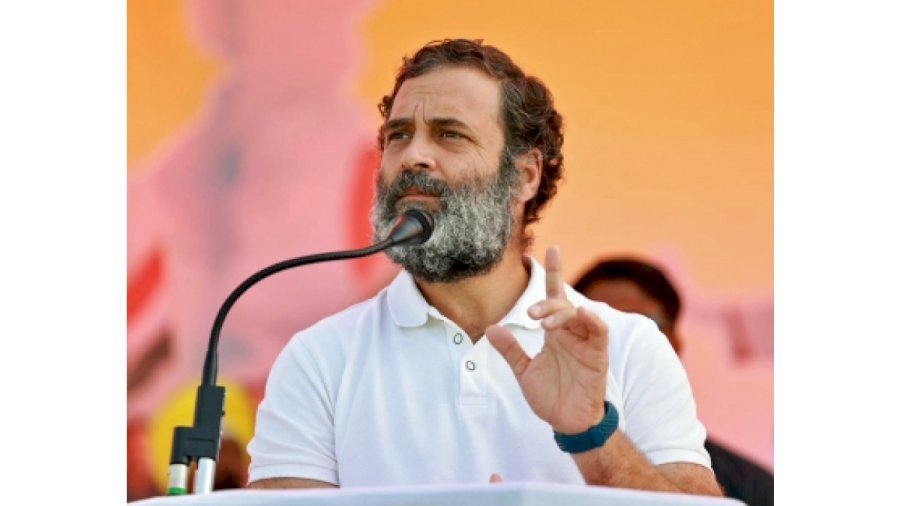 Jalgaon (Maharashtra) : Signing off with a “Jai Maharashtra”, Congress MP Rahul Gandhi hailed both the great heroes and the common people of this state as the Bharat Jodo Yatra (BJY) enters the neighbouring Madhya Pradesh from Wednesday morning, and did not miss the opportunity to slam the Bharatiya Janata Party ahead of his grand exit.

In a signed statement, Gandhi paid tributes to the land of Chhatrapati Shivaji Maharaj before crossing into Madhya Pradesh on the 77th day of the 150-day-long BJY.

The Maharashtra leg saw a trail of bouquets, brickbats, a 10,000 square feet ‘rangoli, grannies hugging Gandhi, children crowding around and performing during the first Prime Minister Jawaharlal Nehru’s birthday – not to mention some unsavory political controversies.

Recalling his experiences here, Gandhi said he “listened” to the people who work hard but are denied the fruits of their “tapasya”, farmers’ deep distress, bewildered youth worried about their future or the simple tribals struggling for their legitimate dues with laws and rights getting diluted every day.

“The root cause of this is the BJP government’s actions which concentrates wealth and power in the hands of a few. It is worsened by its agenda of dividing Indians against each other using culture, religion, caste and language,” he said sharply, in a departure statement.

He referred to how the BJY had debuted in Maharashtra by paying tributes to Chhatrapati Shivaji Maharaj, and passed through Buldhana, the birthplace of his mother Rajmata Jijamata, with hordes of people thronging at all points en route.

“It is our privilege to take inspiration from them as well as the great social reformers and saints of Maharashtra like Shahuji Maharaj, Mahatma Jyotiba and Savitribai Phule, Ahilyabai Holkar, B. R. Ambedkar, Shirdi Saibaba, Gajanan Maharaj and many others,” said Gandhi.

For centuries these legendary persons spread the message of equality, fraternity and social justice, which is also the message of the Constitution drafted by Dr. Ambedkar and also the BJY, he added.

“We are humbled to be walking in their footsteps. We are very grateful for the overwhelming response from the people of Maharashtra, the large crowds who walked with us every morning despite the cold, to the lakhs who attended our public rallies in Nanded and Shegaon. Large number of women and youth joined us which was especially heartwarming,” acknowledged Gandhi.

Recalling his fortnight long state sojourn, the Congress MP said that “we witnessed and celebrated India’s rich diversity” visiting different places of worship and walking with Bhikkhus, Sufis and Warkaris, celebration of Birsa Munda’s 157th birth anniversary with tribals from all over India, remembering his grandmother, the late Prime Minister Indira Gandhi on her birthday with a Shakti Walk for women and a unique public meeting with tens of thousands of tribal women”.

He saluted the state’s hospitality for standing against the BJP’s agenda through its rich traditions, remaining vibrant with a dedicated civil society movement, foresighted artistes from the cultural, literary and film spheres who supported his march wholeheartedly.