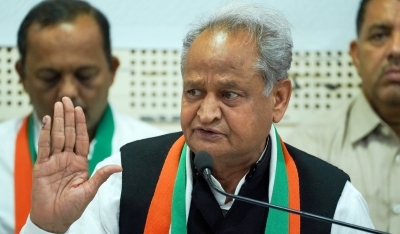 Jaipur : The delay in action by the Congress high command against Chief Minister Ashok Gehlots three loyalists for their alleged acts of indiscipline have left veteran Congress workers disappointed and upset.

they said that the current state of confusion will lead to a major loss in the assembly elections due in December 2023. They have demanded that the high command end the confusion before the entry of Rahul Gandhi’s Bharat Jodo Yatra in Rajasthan in the first week of December, most probably on the 5th.

“We will have at least some time to convince the public if action is taken now,” said Congress MLA Divya Maderna.

Divya said, “It is a reality that the party workers as well as bureaucracy are confused and there is no governance. Files keep lying on the tables. In such a situation how will we deliver governance,” she questioned adding that there needs to be some clarity.

“There is an absolute state of confusion, senior leaders as well as reports in the media have been saying that the final decision on Rajasthan will come after 15 days, but months have passed and there is no clarity since September 25.”

“In fact, September 25 was extreme, no one in the history of the Congress has done something like boycotting the meeting called by the high command. However, since then things have changed. Party workers have started coming out and demanding tough action against indiscipline by party leaders. Also those MLAs who were taken to meetings called by other leaders have come out in the open and said they were convinced by false claims to boycott the official meeting.”

On September 25, the Congress high command had called a meeting and all MLAs were asked to be present there. However, two state ministers Mahesh Joshi and Shanti Dhariwal and RTDC chairman Dharmendra Rathore called a parallel meeting, took the MLAs with them and allegedly made many of them resign.

Rahul Gandhi’s yatra is entering Rajasthan in the first week of December. However, the workers are disappointed as those who were served notices for their indiscipline against the party high command are still unpunished, she added.

Congress MLA KL Bairva said, “Everybody wanted action against three loyalists of the CM including state ministers Mahesh Joshi and Shanti Dhariwal as well as against RTDC chairman Dharmendra Rathore. The more the delay, the more resentment there will be.”

Expressing concern about next year’s assembly polls, he said “It is difficult that we will emerge the winner in these circumstances.”

Another MLA on condition of anonymity said, “We are glad that Rajasthan in-charge Ajay Maken has resigned. The high command has fallen silent after issuing these notices. It should have given its feedback either way after they received replies from these three leaders.”

In fact, many MLAs from the Gehlot camp are also pitching in for the high command to take action after the September 25 incident in which Joshi, Dhariwal and Rathore called a parallel meeting while boycotting the official meeting.

Former deputy CM Sachin Pilot refused to speak in the present circumstances. He said, “We are all set to give a historic welcome to the Bharat Jodo Yatra which will be remembered in the annals of history.