With only six weeks to go, Jana is SO close to welcoming baby number two! She opened up about smelling her husband’s alcohol and prepping her post-baby bod.

Her baby boy is on the way! Jana Kramer, 34, announced that she and her husband Mike Caussin, 31, were expecting their second baby in June. And while they already have Jolie Rae, 2, together, each pregnancy is different — and this one has come with some wild cravings, Jana told . “I crave cold, so like a cold margarita or a cold vodka,” she admitted. “I don’t know why. I don’t even drink vodka! My one craving I can’t have! We went to a concert in Vegas two weeks ago to see Lionel Richie and my husband had a margarita and I was like, ‘Can I just smell it?’ I don’t know why!” But after her scheduled C-section six weeks from now, she’ll probably want something else to celebrate. “I’m a red wine girl.”

Jana’s pregnancy so far hasn’t been all crazy cravings and alcohol sniffing, though! Between touring the hospital she’ll deliver at, preparing their baby boy’s nursery and getting Jolie ready to be a big sister, she and her husband have had their hands full — and that’s not even taking work into account! “I’m traveling the next three weeks but I just need to get my work done and I’ll feel settled,” she said. So it’s a good thing Mike has been making sure his wife stays spoiled. “He’s been really great,” Jana admitted. “He’s had dinner ready and when I’m about to get up and help he’s like, ‘No, just sit down and relax.” That’s what we like to hear!

Jana has been sharing so much of her pregnancy journey with fans on social media since her exciting announcement, posting everything from bare baby bumps and 3-D ultrasounds to gorgeous maternity shoots and workout pics. She’s been staying fit and already has plans for getting her post-baby body in place. “I am stressing a little bit because pilot season is early next year, and I want to make sure that I am on the top of my game,” she said.

For now, we just hope that Jana is enjoying her beautiful pregnancy curves. She’s only got this baby belly for a few more weeks until her little one arrives! 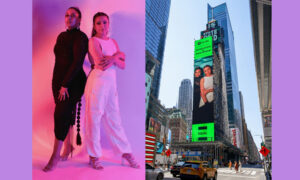