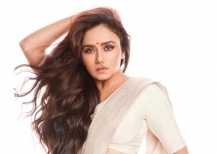 Mumbai, As her latest Marathi language film ‘Chandramukhi’ not only did positive business at the Indian box office but also gained visibility in the international market, the leading lady of the film, actress Amruta Khanvilkar, emphasised on the importance of investment in the marketing of a Marathi film to go global.

The story of the film is based on the novel written by Vishwas Patil and it is set in the 80s era. Amruta essayed the character of a Lavni dancer who falls in love with a politician. Lavni is a traditional Maharashtrian dance form.

Amruta told: “I think one of the exciting parts for me now is the response we have received not only for the content and the cinematic experience of the film but the visibility we gained through multiple promotional activities. I think our Marathi cinema has always been very strong with content but made with a limited budget and not highly marketed. With the success of ‘Chandramukhi’, I think we should understand that along with content, we should invest in promotional activity.”

Apart from India, the film has been released in Dubai, parts of UAE and according to Amruta the makers have special screenings in London, Singapore and in Michigan to showcase the film to the Indian community living there.

She is an actress who not only appeared in Marathi cinema but also acted in Bollywood film like ‘Raazi’, ‘Malang’, and took part in reality shows like ‘Nach Baliye 7’, ‘Jhalak Dikhhla Jaa’, ‘Khatron Ke Khiladi 10’.

She explains how building a fan base in multiple sections of the audience has also added a pan-India appeal to her film.

Amruta said, “There were a lot of ‘firsts’ with Chandramukhi’, be it a special magazine cover, media coverage, Spicejet airline hosting a special activity for our film. There was a 35-inch huge cutout poster of our film at the Royal Opera House, Mumbai for the first time for a Marathi film! It is not that I am bragging but trying to say that if the content of the film is good, with investment in promotion and release, we can win people’s hearts.”

“Of course as an actress, I am always grabbing opportunities to be part of big projects in different regional cinema and TV as well. My visibility on a national platform gives the pan-India appeal to a Marathi film. No doubt, my popularity has increased because of working in Hindi cinema. Since cinema is a tool to show our culture, it also appeals to the international community living abroad,” explained Amruta.

Asked about her next step post the success of ‘Chandramukhi’ she replied, “Gearing up for the shooting of my next Hindi language web series, a Hotstar original and then I have another film lined up. I am not supposed to make any official announcement so I cannot give further details on them.”