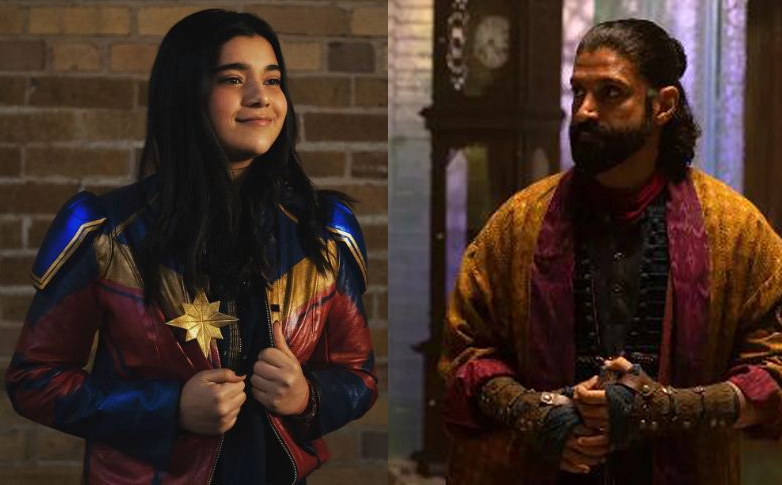 Mumbai : Bollywood actor and filmmaker Farhan Akhtar made his Marvel Cinematic Universe debut with the fourth episode of ‘Ms. Marvel’. He praised actress Iman Vellani, who essays the titular role of Kamala Khan and Ms. Marvel in the series, and said that her energy is very infectious.

Farhan essays the role of Waleed, the leader of the ancient order known as the Red Daggers. Waleed, who acts as a mentor to Kamala Khan when she lands in Karachi to meet her maternal grandmother, helps answer and uncover the mystery behind her superpowers and her true identity.

Talking about his experience working on a Marvel set, Farhan said, “It was very exciting working on the show. It is an absolutely incredible universe and they have created some absolutely incredible characters. So to be one of them – to be Waleed – to be the guy who is from the Order of Protectors of the Red Daggers; it just felt like a very serious responsibility and at the same time, very exciting too.”

He further said that he submitted himself to the vision of the directors while preparing for the role.

“Working with Sharmeen the director and Garry who did the action, I had a wonderful time. We had to go in for a couple of days to do rehearsals and learn the choreography. All the hard work was done there, so that when we got to the sets, it was time to play,” he added.

Sharing his experience with fellow debutant Vellani, Farhan said: “She is an absolutely wonderful person and that’s the most important thing. Her energy is infectious and is the driving force when it comes to the cast of Ms. Marvel.”

“They’d been shooting for a long time before I met them in Thailand where we did all our work together and to see how natural her ability is and how committed she is to do the part she was playing, it just felt like it was day one for her too. She was as excited as she probably would have been on day one. She is someone to look out for, she is incredibly gifted and incredibly talented.”

Fronted by Pakistani-Canadian debutant Iman Vellani as Kamala Khan, Ms. Marvel is a coming-of-age story of a Muslim teenager who discovers that she has superpowers and that her family history goes back to the India-Pakistan Partition in 1947. An avid gamer and a voracious fan-fiction scribe growing up in New Jersey, Kamala is a superhero megafan with an oversized imagination – particularly when it comes to Captain Marvel.

The series, which is inching towards the finale, has been directed by Adil El Arbi and Bilall Fallah, Sharmeen Obaid-Chinoy, a two-time Oscar winner in the short documentary category, and Meera Menon.

It airs on Disney+ Hotstar.