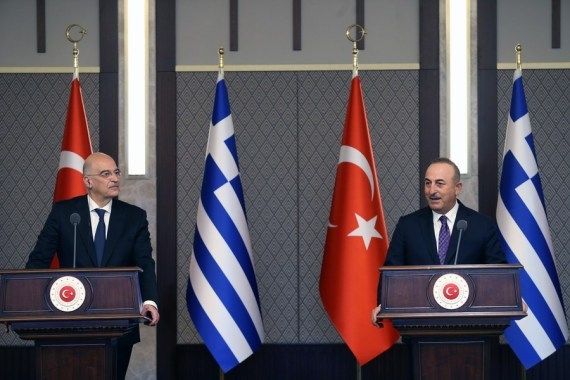 Ankara,Turkey believes that its issues with Greece can be resolved through constructive dialogue between the two neighbours and allies, Turkish Foreign Minister Mevlut Cavusoglu said.

Fait accompli and provocative rhetoric should be avoided in relations between Turkey and Greece, Cavusoglu said at a joint press conference with his Greek counterpart Nikos Dendias here on Thursday.

The visit of the Greek minister to Turkey’s capital Ankara came after months of tensions in the Eastern Mediterranean last year between the two neighbours, reports Xinhua news agency.

“We want to continue this dialogue without preconditions. As two neighbours, as allies, we want to develop our relations with Greece in every field.

“Today we discussed what we can do to improve relations in the coming period,” Cavusoglu stated.

The Turkish Minister, however, emphasized that seeking solutions to bilateral problems through third parties is not the right approach.

Dendias, for his part, agreed that the communications channels between the two countries should remain open.

“Our primary goal is to establish peaceful coexistence based on international law,” he stated.

Greece and Turkey can create a positive agenda in the field of economy, he noted.

Dendias’ visit to Ankara is the first by a Greek Minister in over two years.

Tensions had flared last year as Turkish research ships explored for oil and gas reserves in waters claimed by Greece and Cyprus.

Other issues include competing claims over their respective continental shelves, maritime rights, air space in the Mediterranean, energy, the Cyprus issue and the status of some islands in the Aegean Sea.