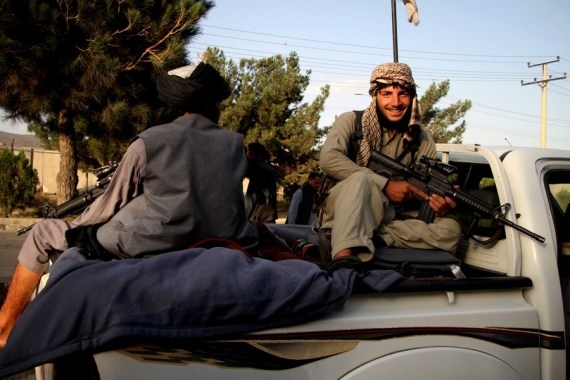 Kabul : Aerial firing using different types of weapons, including machine guns, dominated the sky in Kabul after midnight, which frightened and awoke residents of the Afghan capital.

It was later clarified that the firings, which lasted about an hour, were part of the Taliban’s celebrations for what its called the end of the occupation after the US announced that the withdrawal of troops was completed, Khaama News reported.

Taking to Twitter, Taliban spokesman Zabihullah Mujahid said that “the gunshots heard in Kabul are as a result of celebratory firing, the Kabul residents should not worry, we are trying to control it”.

Regarding the completion of the withdrawal, Mujahid added that “in this way, our country became completely free and independent”.

Addressing a news conference in Washington, which was held by the Department of Defence, on Monday midnight, Kenneth McKenzie, commander of US Central Command, said: “I’m here to announce the completion of our withdrawal from Afghanistan and the end of the mission to evacuate American citizens, third country nationals and vulnerable Afghans.

“The last C-17 lifted off from Hamid Karzai International Airport on August 30, this afternoon, at 3.29 p.m. East coast time, and the last manned aircraft is now clearing the space above Afghanistan.”

McKenzie said while the completion of withdrawal drew an end to US military presence in the war-torn nation after 20 years, “the diplomatic mission to ensure additional US citizens and eligible Afghans, who want to leave, continues”, reports Xinhua news agency

While paying tribute to the 2,461 fallen US service members, including the 13 troops who were killed during the August 27 Kabul bombings, and the over 20,000 personnel injured during the longest war Washington has engaged in throughout history, McKenzie said that no American citizens managed to embark on the final five evacuation flights leaving Kabul, meaning that there were Americans that were left on ground.

The General said the number of US citizens currently still stranded in Afghanistan is “in the very low hundreds”, stressing that the Department of State is now in charge of assisting those evacuees.

“The military’s phase of this operation has ended… The diplomatic sequel to that will now begin,” he said.

The General added that the US will continue trying to extract the remaining American citizens and “negotiate very hard and aggressively” to get eligible Afghans to come to Washington.

US media cited a State Department official as saying earlier on Monday that it was believed that there were fewer than 250 American citizens still in Afghanistan.

Minutes after the last service members the US left the Hamid Karzai International Airport, the Taliban were now controlling the entire facility.

As per the White House and Pentagon, as of early Monday, a total of 116,700 people have been evacuated from Kabul after the Taliban takeover, according to Khaama News.