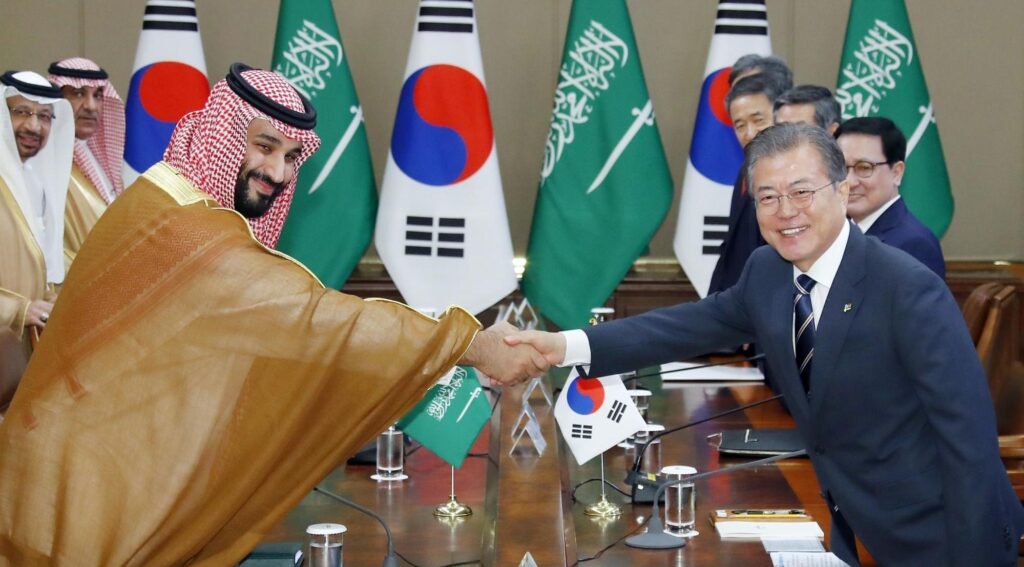 After holding the talks at the Al-Yamamah palace in Riyadh, the two nations signed preliminary deals to jointly develop green hydrogen, which is produced from renewable energy sources, especially solar and wind, and jointly build a hydrogen ecosystem, Yonhap news agency reported, citing a statement by Moon’s office.

Under the deals, South Korea can secure a supply of carbon-neutral hydrogen and ammonia from Saudi Arabia. In return, Seoul can help Riyadh operate hydrogen-powered cars and hydrogen fueling stations, according to the statement.

During the talks, Moon took note of Saudi Arabia’s “Vision 2030” policy of reducing the Arab nation’s dependence on oil and developing its public service sector.

Moon also affirmed that the two nations have expanded cooperation beyond construction, infrastructure and energy into fields such as hydrogen, defense, intellectual property and medicine.

Saudi Arabia is South Korea’s largest trading partner in the Middle East. The kingdom is also the biggest supplier of crude oil to South Korea.

Prince Mohammed bin Salman voiced support for Moon’s efforts to bring peace on the Korean Peninsula, according to the statement.

Moon was in Dubai on Monday, when an attack claimed by Houthi rebels triggered a blast at a construction site in Abu Dhabi that killed three people. Yemen’s Houthi rebels also recently seized a UAE-flagged vessel in the Red Sea.

During the talks, Moon said that he “strongly condemns” the seizure and any activity that “threatens peace and stability in the Middle East,” according to Moon’s spokesperson Park Kyung-mee.

Moon told the crown prince that he hopes the ship and her crew will be freed and return home safely.

South Korea has been in negotiations with Saudi Arabia to sell advanced weapons to Riyadh. Moon told the crown prince that he expects positive results from the negotiations, Park told reporters.

After the talks, Moon delivered a keynote speech at a business forum.

“Saudi Arabia, which has the potential to produce clean hydrogen such as green and blue hydrogen, and South Korea, which has strengths in hydrogen utilization based on hydrogen-powered cars and fuel cell technology, must closely cooperate to lead the global hydrogen economy,” Moon told the forum.

Moon urged Saudi Arabian business leaders to expand business cooperation with South Korea into sectors related to public health and digital technology as a way to cope with a post-pandemic era.

The trip to Saudi Arabia followed a four-day visit to Dubai that included the signing of a preliminary deal with the United Arab Emirates (UAE) to sell midrange surface-to-air missiles in the latest sign of deepening defense cooperation between the two nations.