Tehran, May  Iranian President Hassan Rouhani has slammed the sanctions imposed on the country by the US as an act of “direct oppression against the poorest”.

“Sanctions are a swindle on the people, direct oppression on the poorest in society, an abuse of the rights on the sick who lack medicines, and an act of cruelty on the underprivileged who are forced to buy bread at a high price,” Rouhani said at a cabinet meeting here on Wednesday.

Iran’s economy has suffered a harsh blow since sanctions on the country were re-imposed by former US President Donald Trump’s administration after Washington unilaterally abandoned the 2015 nuclear agreement, known as the Joint Comprehensive Plan of Action (JCPOA), in May 2018, reports Xinhua news agency.

Rouhani pointed to the resilience of the Iranian people vis-a-vis the US ‘”economic war” on Iran for more than three years as a defeat of the sanctions.

Regarding the “defeat of Iranophobia” in the world’s public opinion, Rouhani noted that the termination of a UN-imposed arms embargo on Iran on October 18, 2020, in line with the JCPOA, was another success of Iran’s diplomacy that helped Iran’s military to “stand up to the enemy”.

The Iranian government will stand by its “constructive interaction” approach “until the end”, the President said, adding that he has “no doubt” that all sanctions will be lifted.

Since April 6, the JCPOA Joint Commission has conducted meetings in Vienna, aiming at getting the US to return to the deal and Iran to resume full compliance with it. 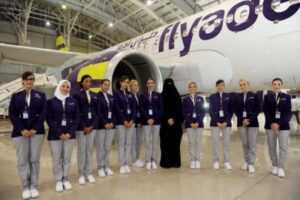 In a first, women-only crew operates flight in Saudi Arabia