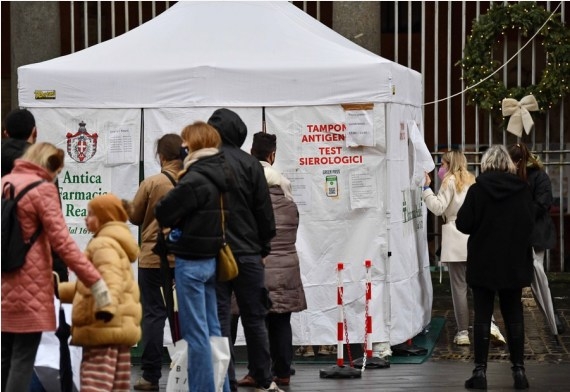 Brussels : Following a break over the holiday season, European countries are witnessing skyrocketing new Covid-19 infections as the Omicron variant continues its onslaught across the continent.

France, Greece and Croatia have broken new Covid-19 case records while the two neighbouring countries of the Netherlands and Belgium have seen infection rates hiking significantly by 35 per cent and 79 per cent respectively, Xinhua news agency reported.

In Greece, despite a tightening of measures during the holiday season, cases have skyrocketed. The National Public Health Organization (EODY) confirmed on Tuesday 50,126 infections within 24 hours, an all-time high.

Greek experts expect the number to continue rising this month, with daily cases possibly reaching 80,000 in the coming days.

In Hungary, official data on Wednesday showed 5,270 new infections in a 24-hour span, more than doubling the figures recorded in the previous few weeks.

Reportedly in a “community spreading” phase, Finland reported 38,700 new Covid-19 cases in the past seven days, compared to 19,600 new cases in the previous week.

Despite vaccination campaigns and anti-pandemic measures including closures and lockdowns, the peak of new infections has yet to come in some European countries, experts say.

“The peak of the pandemic has not been seen in Finland as of yet,” said Liisa-Maria Voipio-Pulkki, senior expert at the Finnish Ministry of Social Affairs and Health.

Dutch experts think that the peak will arrive at the end of January. “But it is not clear how high that peak will be,” said Dutch epidemiologist Susan van den Hof.

Official data showed that the surge of new Covid-19 infections was largely fuelled by the highly transmissible Omicron variant, and the situation was worsened by gatherings during the holiday season.

The Spanish Ministry of Health said the Omicron variant is now responsible for 43 per cent of all Covid-19 cases in Spain.

In Hungary, the Omicron virus variant is also spreading fast. The Hungarian government said on its official website on Wednesday that the variant is responsible for more than 11 percent of new infections.

Croatian Minister of Health Vili Beros said Omicron is the reason for the increased number of infections while other factors include the gatherings for New Year’s Eve, as well as non-compliance with measures.

Polish Minister of Health Adam described the increase in the country as a temporary situation caused by the holiday season and the increasing number of tests performed.

Hungarian healthcare expert Zsombor Kunetz told Xinhua that the government should do more to counter the Omicron variant.

“As I have been saying before, what the government should do to stop the pandemic are the following: mandatory vaccination, mandatory use of FFP2 mask in crowded places indoors, and 2G rules except for workplaces, public transportation, and grocery stores. Only vaccinated individuals should be allowed to any other locations,” said Kunetz.