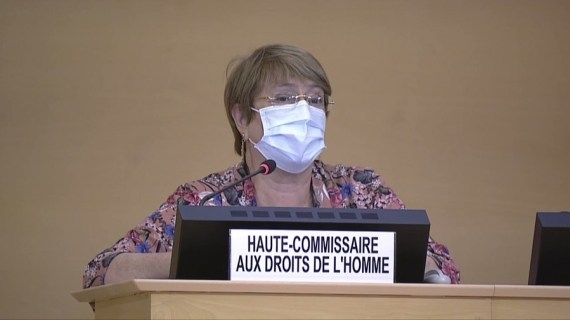 United Nations : Amid criticism that she had gone soft on China, Michelle Bachelet has announced that she will not seek a second term as the UN High Commissioner for Human Rights.

After making the surprise announcement at a meeting of the Human Rights Council in Geneva on Monday, she, however, told reporters that her decision was unconnected to the China visit and that she had told UN Secretary-General Antonio Guterres two months about not seeking another term.

She said that she wanted to return home to Chile and spend time with her family.

Bachelet is a former two-term president of Chile and with the approval of the General Assembly Guterres appointed her the UN human rights head for a four-year term in 2018, which ends in August.

Bachelet has been a strong critic of India over human rights issues and New Delhi has hit back hard – in one instance accusing her of being indifferent to terrorism.

Her visit to China last month and her statements there were seen as allowing Beijing to exploit it for publicity and whipped up criticism from the US as well human rights groups.

In a statement in Guangzhou, she said her visit was not an investigation but an opportunity to meet leaders “to listen to each other, raise concerns, explore and pave the way for more regular, meaningful interactions in the future, with a view to supporting China in fulfilling its obligations under international human rights law”.

US Secretary of State Antony Blinken expressed concern that the conditions imposed by China on her visit “did not enable a complete and independent assessment of the human rights environment in the PRC, including in Xinjiang, where genocide and crimes against humanity are ongoing.”

Human Rights Watch Executive Director Kenneth Roth said that she did not condemn the atrocities against the Uyghurs “even remotely commensurate with the severity.”

He also criticised her for adopting the official Chinese term “VETCs” (Vocational Education and Training Centres) for the mass detention camps for Uyghur Muslims in Xinjiang, which have been called internment camps by the US.

While defending the conduct of her visit to China, she repeated the term in her update on human rights developments during which she said she was not going for a second term.

She said she “raised concerns regarding the human rights situation of the Uyghur and other predominantly Muslim minorities in Xinjiang, including broad arbitrary detention and patterns of abuse, both in the VETC system and in other detention facilities”.

Bachelet has also been criticised for the delay in publishing a report on the human rights situation in Xinjiang.

She said that it is being updated and first “will be shared with the (Chinese) government for factual comments before publication”.

Guterres stood by Bachelet, saying, “In all she has done, Michelle Bachelet lives and breathes human rights. She has moved the needle in an extremely challenging political context – and she has made a profound difference for people around the globe”.

Asked about her controversial visit to China, his spokesperson Stephane Dujarric said Guterres “was very clear in his support from Ms Bachelet, including her recent trip to China”.

Bachelet’s update on Monday did not make any mention of India, although she has issued scathing criticisms in the past on a myriad of issues.

These have included the farmers’ protest, the revocation of Kashmir’s special constitutional status, the National Register of Citizens, the enforcement of foreign contribution rules on NGOs, and sedition charges against journalists and activists.

India has hit back against her criticism.

In one of the strongest countercriticisms, Mani Pandey, India’s Permanent Representative to the UN in Geneva, said last year after one of her updates to the Human Rights Council, “Objectivity and impartiality have to be the hallmarks of any human rights assessment. We are sorry to see that the High Commissioner’s oral update is lacking in both”.

He added, “Her indifference to terrorism is, of course, not new”