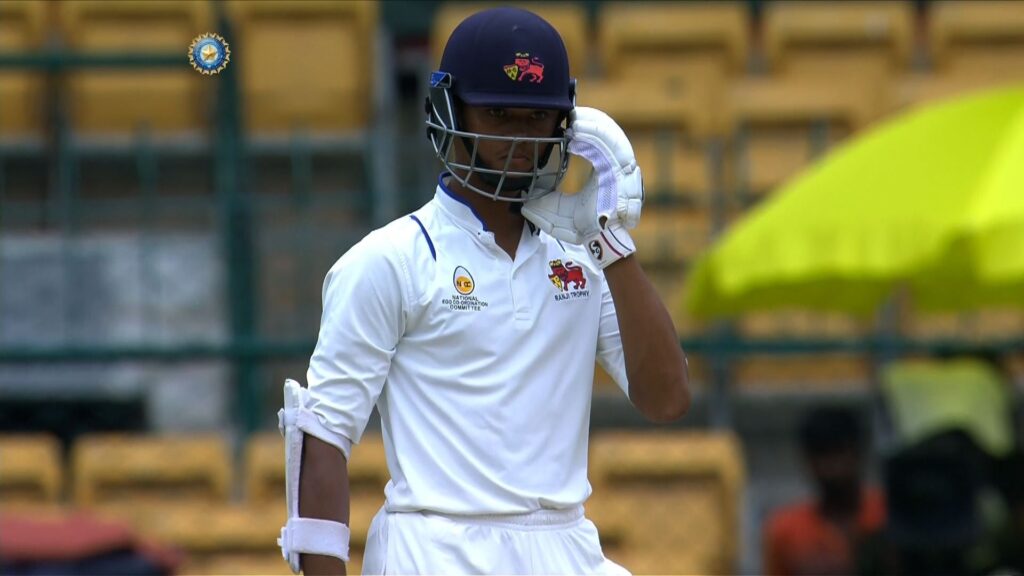 Bengaluru :  Yashasvi Jaiswal slammed 78 as Mumbai reached 248/5 at stumps on day one of Ranji Trophy final against Madhya Pradesh at the M Chinnaswamy Stadium on Wednesday.

Jaiswal, in company of skipper Prithvi Shaw, added 87 for the first wicket, but the 41-time champions were unable to string a 50+ stand thereafter as Madhya Pradesh bounced back from second session onwards. Off-spinner Saransh Jain took 2/31 while Anubhav Agarwal was impressive in his 2/56.

After electing to bat first under overcast skies and cool weather, Mumbai began well with Jaiswal being the initial aggressor, dancing down the pitch to hit Kumar Kartikeya Singh for a six over mid-on. When Kartikeya again bowled short, Jaiswal hanged back in his crease and cut sweetly through backward point for four.

After almost being run-out due to a huge mix-up, Jaiswal continued to get forward and drive Gaurav as well as Saransh through the off-side. Shaw, despite fetching some boundaries, was struggling to adjust to the bounce and deviation off the pitch against Gaurav and later Agarwal.

Against spinners, especially Kartikeya’s left-arm spin, who wasn’t getting much help from the pitch, Shaw used his feet to slam a lofted six over long-off and follow it up with a boundary coming off a beautiful straight drive in his first over of facing spin.

But him being troubled against movement from pacers eventually caused his downfall as fast bowler Anubhav Agarwal breached through his defence to rattle his off-stump. Armaan Jaffer continued his good nick with a lovely punch-drive off Agarwal, presenting the full face of the bat and brought up Mumbai’s hundred when a thick outer edge on defence going past gully.

Post lunch, Madhya Pradesh made a comeback as Mumbai lost their second wicket when Armaan Jaffer got a thick inner edge on a drive off a slower ball from Kartikeya and was snapped by a diving short mid-wicket. After Jaiswal reached his fifty with a single through mid-wicket, Suved Parkar slammed a brace of boundaries before playing the flick too early and leading edge popped to mid-wicket off Saransh.

But Jaiswal had no such issues, hitting Gaurav for three boundaries – driving with full face of the bat, outside edge running past gully and cutting over gully. He was elegant while using his feet to cream Kartikeya through extra cover. But for the third time in the session, Mumbai lost a wicket against run of play as Jaiswal went for an expansive drive, only for it to fly towards gully.

With the in-form Sarfaraz Khan at the crease for Mumbai after surviving a close lbw shout off Gaurav Yadav and Hardik Tamore striking a brace of boundaries, Mumbai were hopeful of getting a big score by the end of the day.

After tea, Sarfaraz survived a loud lbw appeal off Kartikeya. The ball hit his pad, popped up and was caught by Rajat Patidar running from slip. He and Tamore got some boundaries, but the latter nicked to slip off Saransh, departing for 24.

Post Tamore’s fall, Madhya Pradesh kept things tight by drying up the runs for Sarfaraz as well as Shams Mulani. Eventually, Sarfaraz and Mulani ensured no further loss of wickets for Mumbai as 47 runs came off the final session of the day, compared to 108 and 89 runs respectively in the first two sessions.