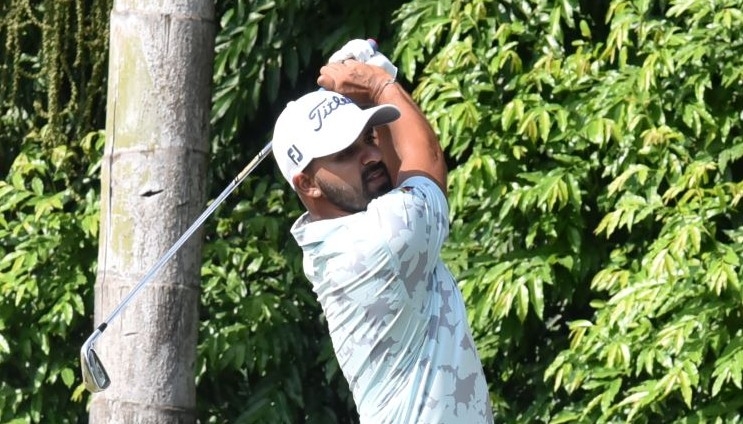 Singapore : India’s Khalin Joshi overcame strong winds and a demanding yet impressive golf course to claim the first-round lead in The Singapore International at Tanah Merah Country Club on Thursday.

Joshi shot a brave five-under-par 67 on the Tampines Course, ahead of Englishman William Harrold who finished in second place after a 69 in the US$1 million event, which is the penultimate tournament of the 2020-21 season on the Asian Tour.

Australian Wade Ormsby, the current leader of the Asian Tour Order of Merit, was in a large group of players who fired 72.

Scores were high as the field battled wind speeds that reached 35km per hour, but Joshi was undeterred as he nailed seven birdies and dropped just two shots.

“It was obviously a very challenging golf course to start off with; it’s long, it’s windy and the flags were all tough, so it wasn’t very easy, greens are firm,” said Joshi, who has won once before on the Asian Tour, the 2018 Panasonic Open India.

The Indian will have enjoyed his first day success even more as he has family in Singapore including his grandmother, sister and uncle. He’s been visiting the country since he was a child.

Added Joshi: “It’s been a while since I’ve been leading on the Asian Tour. It’s obviously feeling very good. But it’s a four-day tournament, so you know, there’s a long way to go still. Obviously, it’s a challenging golf course, everybody is going to make mistakes. The key is to stay patient and whenever you have the chance to capitalise, whenever you have chances to make birdies to capitalise, and you know, just enjoy the set because it’s going to be a long week for sure.”

Journeyman tour pro Harrold, who played on the EuroPro Tour last year, made an eagle, four birdies and three bogeys to take the clubhouse lead in the morning session.

“It’s a really hard round! Fast and windy obviously,” said Harrold. “I hadn’t played much golf. I haven’t played on the Asian Tour for ages, and this is a big event, so it just got into my head a little. I have been playing quite good last year, I was playing in England. And I have tended to play reasonably well when I have played on the Asian Tour. I was really happy just to get in. I think I’m the last man on the field, I got in on Tuesday last week, sorted out the paperwork quickly. For the first time in a long time, I’m just happy to be here.”

The 34 year old much travelled golfer turned professional in 2012 and claimed a title on the MENA Tour that year and won the Belgian Challenge Open on Europe’s Challenge Tour two years later.

Reigning Asian Tour Order of Merit champion Jazz, coming off a five-week break, was content with his round after birdieing his final two holes.

He said: “It was pretty good. I was a bit rusty on the front nine and holed a couple of good putts but missed some really easy ones as well. All in all, it was a pretty good round on a tough Tampines course.

“I think we only had one hole today without the wind. But I think we are playing the same condition as the afternoon – it’s pretty tough.”