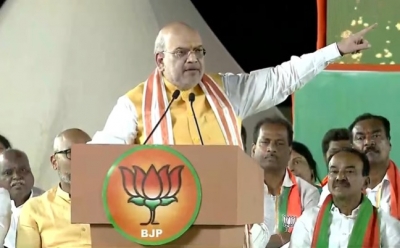 Hyderabad,  Telangana Rashtra Samithi (TRS) has termed as “pack of lies” the speech of Union Home Minister Amit Shah at a public meeting near Hyderabad.

Harish Rao came out with facts and figures to counter Shah’s claims. He alleged that the BJP leader tried to mislead people of Telangana with his lies.

The finance minister dubbed the Union home minister as ‘Shah of lies’ and described the BJP as ‘Bada Jhoota Party’.

Harish Rao dared Shah to prove that the Centre granted funds to Telangana’s ‘Mission Bhagiratha’, which is aimed at providing drinking water to every household.

Dayakar Rao said that there was no truth in the Union home minister’s claims on Sainik School, rail coach factory and medical colleges.

He alleged that the BJP has done nothing for Telangana in the last eight years and it even went back on all the commitments made to the state.

He told reporters in Warangal that people of Telangana will not believe the falsehood of the BJP leaders.

Dismissing Shah’s criticism of the TRS government, he said TRS not only fulfilled 99 per cent of its poll promises but also went a step ahead to undertake schemes for the welfare of people which were not part of the election manifesto.

“I want to ask the BJP if it has fulfilled even one poll promise,” he said.

The TRS leader slammed the BJP government at the Centre for the steep hike in prices of petrol, diesel and cooking gas.