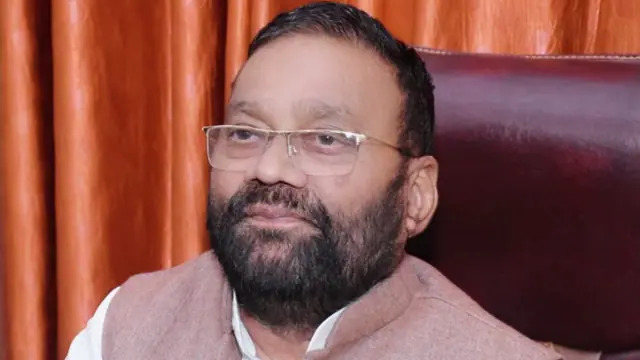 Maurya accused the ruling BJP government in Uttar Pradesh of trying to trap the people of the country in a ‘web of lies’ when it saw itself being cornered over the Shrikant Tyagi incident.

Tyagi, who was on the run for four days, was arrested by the Noida Police on Tuesday in connection with assaulting and abusing a woman at Grand Omaxe Society in Noida.

Soon after the arrest, Noida Police Commissioner Alok Singh said that Tyagi had an ‘MLA’ sticker on one of his vehicles which he said was given to him by his “old political colleague” Swami Prasad Maurya.

“We are verifying this information. His driver had painted the Uttar Pradesh government emblem on the car number plate. Probe is underway under the Gangster Act,” Singh added.

Maurya, who is in Kushinagar, told reporters, “The BJP is trying to trap the people in the ‘web of its lies’. I have not been to Uttar Pradesh Vidhan Sabha for months. Got no passes made in the last seven to eight months. I became an MLC on July 11 and no passes were made since then. I did not give any pass to Shrikant Tyagi. All this is a game of the BJP which intends to shift the blame on me for its mistake. Of course, I met him (Shrikant Tyagi) in 2017 when I was a BJP leader. Thereafter, he never met me.”

Attacking the BJP over the Shrikant Tyagi issue, the SP MLC said: “He (Shrikant) had half a dozen security personnel allotted to him. Is it possible without the blessings of the BJP government?”