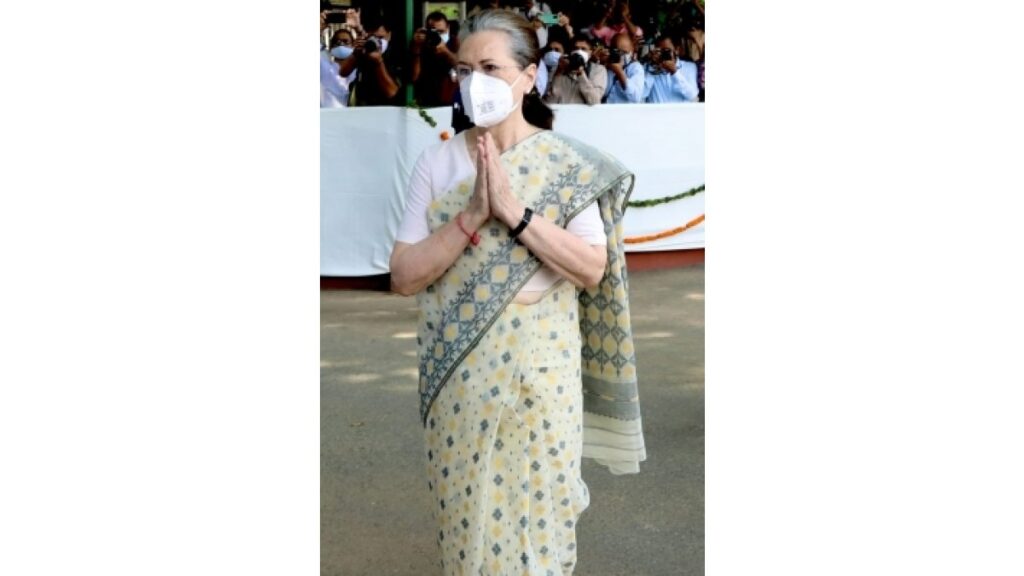 New Delhi : Congress interim President Sonia Gandhi on Friday said that the Monsoon Session of Parliament was a complete washout entirely due to the governments obstinate and arrogant unwillingness to discuss and debate urgent issues of public importance.

She also emphasised on opposition unity ahead of the 2024 Lok Sabha elections to give the country a government that believes in the values of the freedom movement and in the principles enshrined in the Constitution.

She made the remarks at the meeting of the 19 opposition parties which was chaired by her.

Speaking at the meeting, Sonia Gandhi said, “Monsoon session of Parliament was a complete washout entirely due to the government’s obstinate and arrogant unwillingness to discuss and debate urgent issues of public importance.”

The Congress leader said that the Pegasus snooping scandal that affects each and every citizen, the repeal of the three anti-farmer laws – the agitation of farmers that has been going on for the past nine months, the price rise of essential commodities and the continuing assault on federalism and the institutions of our democracy needed to be discussed.

Sonia Gandhi said that in spite of this, the session was marked by the “determined unity” that all Opposition parties demonstrated for over 20 days in both the Houses.

“We functioned in a coordinated manner with daily discussions among our floor leaders,” she said, adding that it was entirely due to the opposition parties that the Constitutional Amendment Bill was passed to restore the long-standing rights of states to identify and notify OBCs.

“The Government had erred three years back and as you well know this Bill was required to rectify that mistake and a subsequent ruling of the Supreme Court,” she said.

She added that she was confident that this unity will be sustained in future sessions of Parliament as well. “But the larger political battle has to be fought outside it,” she said.

“Of course, the ultimate goal is the 2024 Lok Sabha elections for which we have to begin to plan systematically with the single-minded objective of giving to our country a government that believes in the values of the Freedom Movement and in the principles and provisions of our Constitution,” Sonia Gandhi said.

“This is a challenge, but together we can and must rise to it because there is simply no alternative to working cohesively together. We all have our compulsions, but clearly, a time has come when the interests of our nation demand that we rise above them,” the Congress leader said.

She also pointed out that the 75th anniversary of India’s Independence is indeed the most appropriate occasion for us to reaffirm our individual and collective resolve. “Let me say for its part, the Indian National Congress will not be found wanting,” she said.

In her remarks, Sonia Gandhi also hailed the opposition parties for coming together on several occasions and said, “We had written jointly to the Prime Minister (Narendra Modi) on May 12, 2021 on the vaccination strategy to deal with the Covid-19 pandemic, on the repeal of the three anti-farmer laws and on the free distribution of foodgrains to the needy.”

She said that some crucial changes were introduced in the procurement system of vaccines following our intervention.

“Needless to say, as always, somebody else has taken the credit. This does not matter really, as long as the people of the country have benefited,” she said.

She also said that in recent months we have issued two public statements jointly on various national issues of common concern.

“Our joint statement of May 23 covered the Covid-19 pandemic and the one on May 2 dealt with the repeal of the three anti-farmer laws and the need to resume talks by the government with the Samyukta Kisan Morcha,” the Congress leader said.

She pointed out the role of a few opposition parties and chief ministers in taking up matters of public importance with the Prime Minister directly.

“I understand that (NCP leader) Sharad Pawarji brought to his attention how the new Ministry of Cooperation, led by Home Minister (Amit Shah) himself, is a blatant interference in the Constitutional rights and responsibilities of state governments,” she said.

“And on behalf of the Congress Party, I have also written to the Prime Minister on many occasions to highlight the need for urgent measures such as direct cash support, especially to those whose livelihoods have been badly affected,” she added.

The meeting was attended by leaders of the Trinamool Congress, the Nationalist Congress Party, the DMK, the Shiv Sena, the Jharkhand Mukti Morcha, the Communist Party of India, the Communist Party of India-Marxist, the National Conference, the Rashtriya Janata Dal, the All India United Democratic Front, the VCK, the Loktantrik Janata Dal, the Janata Dal-Secular, the Rashtriya Lok Dal, the Revolutionary Socialist Party, the Kerala Congress-Mani, the Peoples Democratic Party, and the Indian Union Muslim League.

However, the Samajwadi Party, the Aam Aadmi Party, and the Bahujan Samaj Party stayed away.

During the meeting, Soren, who is also the chief of the JMM, said: “We have to struggle and resist all anti-people policies in a more cohesive manner. We have to sharpen our attacks on issues like income increase, inflation, unemployment, farmers issues and Covid management.”

Banerjee, who is the Trinamool Congress chief, said: “We should fight the government collectively.”

She said that they must forget their internal differences to take the government head on.

The Trinamool Congress leader also raised farmers issues and talked about the dictatorship of the central government.

The meeting called by Sonia Gandhi is being seen as a measure taken by the Gandhi family to reassert their position as the central figures among the Opposition. During the Monsoon Session, former party chief Rahul Gandhi had met several leaders of the Opposition over breakfast.

On the other hand, Congress leader Kapil Sibal had organised a dinner party on August 9 which was attended by several top Opposition leaders.