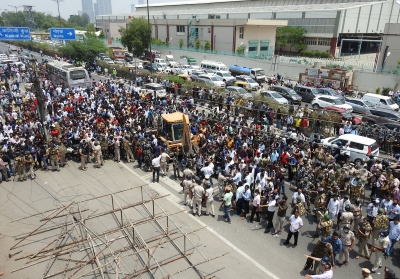 New Delhi,  Senior advocate P.V. Surendranath mentioned the Shaheen Bagh demolition matter before a bench headed by Justice L. Nageswara Rao and comprising Justice B.R. Gavai. The bench orally observed, “Why demolition takes place when matter is listed…” In the morning, the Chief Justice had asked the counsel to mention the matter before the bench considering the Jahangirpuri demolition.

Solicitor General Tushar Mehta submitted that the demolition carried out by the municipal corporation in Jahangirpuri, was in pursuance to the direction of the Delhi High Court direction.

Mehta said that he is not aware of the Shaheen Bagh matter and added that he can’t be there at 2 p.m. due to personal difficulty. Justice Rao said ask someone else to be there. The bench orally observed, “Let us protect people, if something happens…”

After a brief hearing, the bench asked the counsel to serve the papers to the respondent and agreed to take up the case at 2 p.m.

“It is most respectfully submitted that the political executive of Respondent No. 1 Municipal Corporation (SDMC) is maliciously indulging in a political game plan. The entire action of the Respondent is absolutely and manifestly arbitrary and without following any due process of law,” said the plea filed by Delhi Pradesh Rehri Patri Khomcha Hawkers Union through its General Secretary.

The plea contended that without giving a proper show cause notice and giving breathing time to people residing / working in different areas of south Delhi, the respondents proposed to start demolition of buildings denying their precious constitutional rights and right to life. “The authorities have not issued statutory notice to owners / occupants of the buildings to show cause why the buildings should not be demolished. No notice is issued to them as to how encroachment is made by the occupants / owners of the buildings”, it added.

A plea challenging the demolition drive in Shaheen Bagh by South Delhi Municipal Corporation (SDMC) was mentioned before the Supreme Court on Monday.