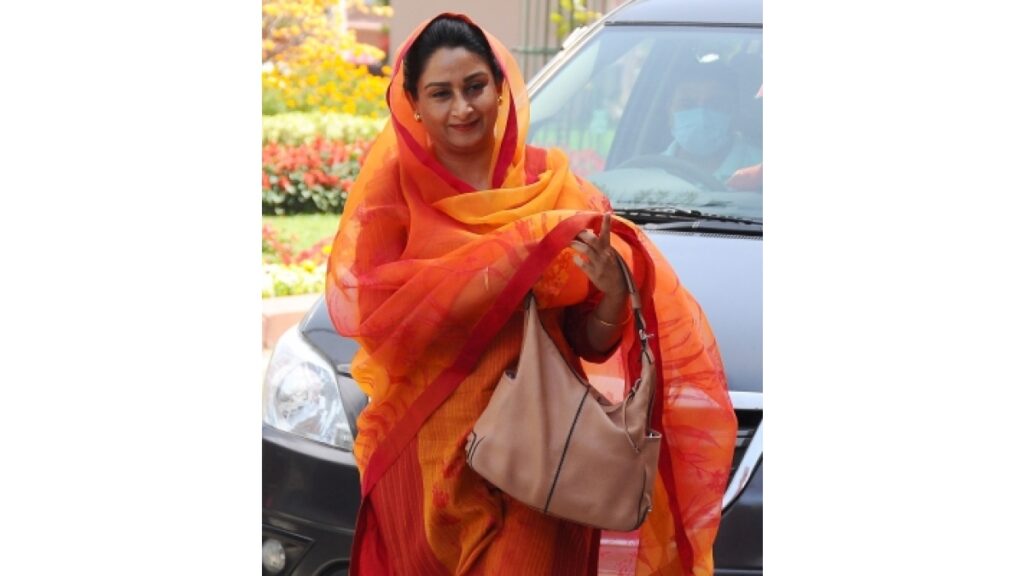 New Delhi : Bathinda MP Harsimrat Kaur Badal on Tuesday called for immediate reconstitution of the MSP committee by nominating farmer leaders in it as promised in writing when the farmers’ agitation was lifted even as she asserted Parliament should discuss the need to tackle narco-terrorism which was destroying the youth of Punjab.

Speaking at the all-party meeting convened on the eve of the winter session of Parliament, Harsimrat said the issue of reconstitution of the MSP committee by including farmers, agricultural experts and government representatives from Punjab should be discussed and resolved.

She said the aim and intentions of the committee should also be as per the written assurance given to farm unions when the ‘kisan andolan’ was withdrawn.

“Farmers right to MSP should be legalised as promised,” she said.

The Bathinda MP also spoke on the Supreme Court observation that the border state of Punjab was in danger due to burgeoning spurious liquor and drugs and said the issue needed to be discussed keeping in view its sensitivity.

She said the Punjab government had admitted that even though it had filed 36,000 FIRs, no concrete action had been taken with only three chargesheets being filed by clubbing some FIRs.

She said former chief minister Capt Amarinder Singh had promised to end the drug menace in four weeks, while AAP convener Arvind Kejriwal had announced that this would end in 10 days.

“The observations of the apex court indicate that the problem has increased manifold ever since the AAP government took over the reins of the state.”

She also remarked that the need of the hour was ‘nashabandi’ and that since MPs from other states were also alarmed by the increase in drug trafficking, the issue should be discussed in Parliament.

Harsimrat also spoke on how gangsters had become a law onto themselves in Punjab even as the AAP government was helpless before them.

She said gangsters were indulging in targeted killings and extortions which had created a fear of psychosis among the people of the state.

“Instead of correcting this issue, Chief Minister Bhagwant Mann was playing politics by falsely asserting on the eve of the Gujarat elections that dreaded gangster Goldy Brar had been detained in the US.”

She said subsequently Goldy Brar had repudiated this claim through interviews to the media.

Highlighting another issue, she also asserted that the issue of extreme deterioration of the air quality in Delhi be taken up in the Parliament. She said this development had occurred after the end of the paddy harvesting season.

“Farmers of Punjab have been accused of choking Delhi in the past. However, now it is clear that the problem is elsewhere. This needs to be debated and resolved,” she added.