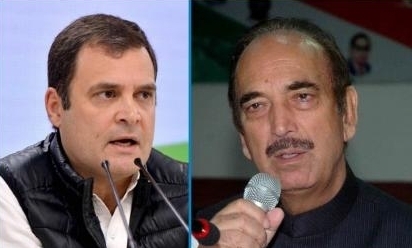 New Delhi : With the announcement of Rajya Sabha polls on 7 seats on Thursday, the intense lobbying has begun in the Congress party for tickets.

The grand old party is likely to contest two seats — one in Tamil Nadu and the other in Maharashtra. In the alliance arrangement during the state polls, one seat was promised to the Congress by the DMK and the other seat is from Maharashtra which has fallen vacant after the demise of Rajiv Satav.

Many leaders are said to be in the fray including former Leader of the opposition in Rajya Sabha Ghulam Nabi Azad, Mukul Wasnik, Milind Deora, Sanjay Nirupam and Pramod Tiwari, while from Tamil Nadu, sources said that the former Congress President Rahul Gandhi is in favour of Praveen Chakravarty who is the chairman of the data analytics department of the Congress party.

But sources say that the DMK is averse to the idea of sending a non political person to the upper house while Ghulam Nabi Azad shares a good rapport with the DMK leadership. Pramod Tiwari is a surprise name but he is banking on his proximity to Priyanka Gandhi and is keen to be nominated for the upper house elections.

From Maharashtra the Congress has lone seat with three leaders in the fray — Mukul Wasnik who is from the scheduled caste has thrown his hat while Milind Deora who was once close to Rahul Gandhi is also being considered and former Mumbai Congress President Sanjay Nirupam’s name is in the fray as he met Rahul Gandhi last week.

While many leaders including Azad, Wasnik, Veerappa Moily are from the G-23 group, Moily and Wasnik have mended fence with Rahul Gandhi, sources said.

However, in the entire elections, the BJP is also likely to get two seats, one in MP and the other in Assam where Sarbanda Sonowal is likely to be sent from the state and the seat in Puducherry will go to the NDA. It remains to be seen if the Puducherry seat goes to the BJP or not. From West Bengal, Congress turncoat Sushmita Dev is likely to be nominated by the Trinamool, but for the polls in Tamil Nadu both the seats will go to the DMK and its allies as it’s working on to take PMK on board.

The Election Commission on Thursday announced dates for bypolls for Rajya Sabha for various states. There are six casual vacancies in the Council of States while one seat from Puducherry is going for regular poll. A bypoll for the lone seat of legislative council in Bihar is also scheduled.