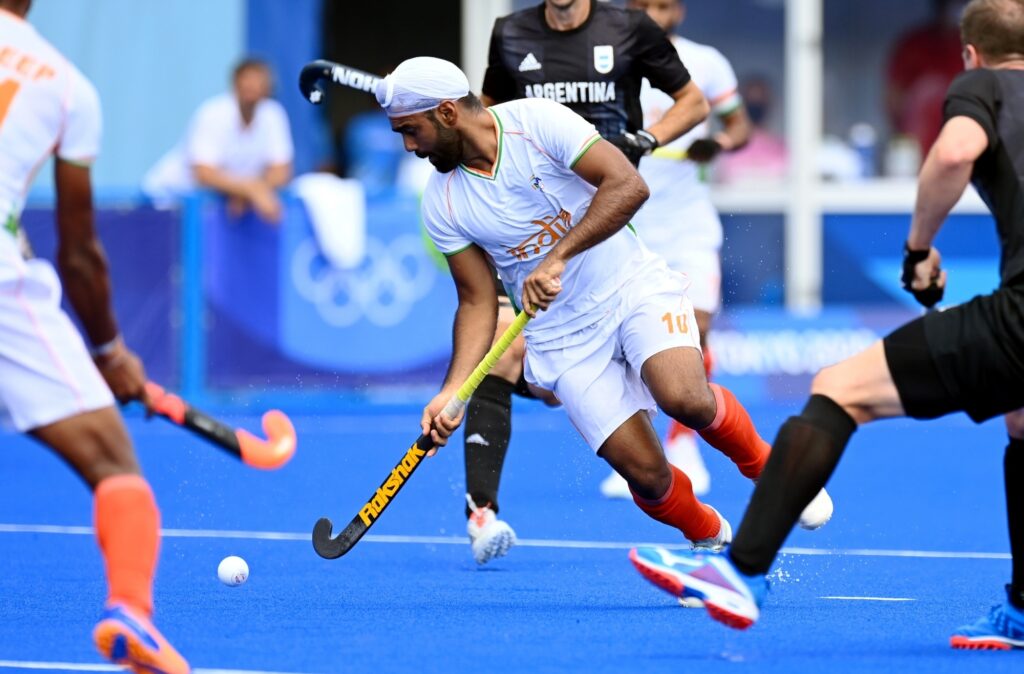 Tokyo: India scored twice in the last two minutes to beat Rio Olympics gold medallist Argentina 3-1 in a Group A preliminary league match at the Tokyo Olympics on Thursday. India have cemented their hold on the second spot with a match against hosts Japan to go. This win has assured India a place in the quarterfinals with the final Group match against Japan to go.

After a barren first half, India opened the scoring when Varun Kumar, who came into the 16-member team for this match in place of experienced Birendra Lakra, scored off a penalty corner in the 43rd minute.

India had denied Argentina many opportunities in the first two quarters but the South Americans came back strongly in the fourth quarter. Argentina earned their first penalty corner and Casella Schuth converted with a brilliant drag-flick to pull Argentina, who had lost to Australia 5-2 in their previous match and had to win this match to maintain their chances of finishing second in the group, level at 1-1.

Argentina increased pressure and dominated the fourth quarter as they sensed an opportunity to score the winner.

However, India, who had defeated Argentina in two Pro League matches in April this year, sealed victory when they scored twice in the last two minutes when Varun Sagar Prasad capitalised on a rebound off a shot by Dilpreet Singh to make it 2-1 for India, and then Harmanpreet Singh converted their eighth penalty corner to make it 3-1.

The two goals not only sealed victory for India but also brought up their goal difference to zero. The goal difference had dropped to -5 after the humiliating 7-1 defeat to World No 1 Australia. But victories in the last two matches against Spain (3-0) and Thursday’s 3-1 verdict against Argentina virtually assured India the second spot.

India had 14 shots at the goal as compared to only six for Argentina, they had 28 attacking circle penetrations as compared to eight for the South Americans.

India held 53% possession as compared to 47% for Argentina, they earned eight penalty corners as against only two for the defending Olympic champions.

India now have nine points from four matches and are placed second behind Australia (12), who have won all four matches so far.