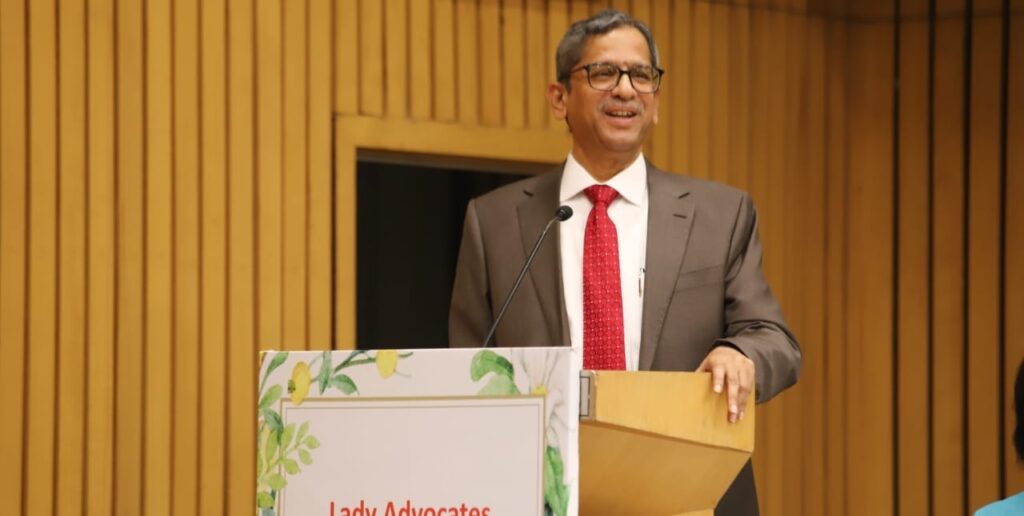 Aurangabad (Maharashtra) : Highlighing major concerns over judicial infrastructure in the country, Chief Justice of India N.V. Ramana on Saturday made some shocking revelations, including how almost 20 per cent of the judicial officers in the country don’t even have proper courtrooms to sit and preside over justice delivery.

Of the total sanctioned strength of 24,280 judicial officers in India, there are only 20,143 court halls, including 620 rented premises, and 26 per cent of the court premises have no separate toilets for women and 16 per cent do not even toilets, while only 54 per cent courts have purified drinking water facility.

In the computer-era, only 27 per cent of the courtrooms have computers on the judges’ dais with video-conferencing facility, only 51 per cent courts have a library, 32 per cent have a separate record room and only 5 per cent have basic medical facilities, the CJI revealed.

“Good judicial infrastructure for courts in India has always been an afterthought. It is because of this mindset that courts in Indian still operate from dilapidated structures making it difficult to effectively perform their function,” he said.

Inaugurating the Bombay High Court Aurangabad Bench’s Annex Building’s B and C Wings along with Chief Minister Uddhav Thackeray, Union Law Minister Kiren Rijiju and other dignitaries, CJI Ramana said good judicial infrastructure is important to improve access to justice and meet the rising demands of the people who are more aware of their rights and developing economically, socially and culturally.

Citing a global research of 2018, he said that “failure to deliver timely justice can cost the country as much as 9 per cent of the annual GDP” and without adequate infrastructure for courts, “we cannot aspire to fill this gap”.

In his address, Thackeray said he would soon allot land for the extension of the Bombay High Court and invited the CJI to come and perform the ground-breaking ceremony for it.

Stating that delivering justice is not the responsibility of the courts along but all of us, he said the world’s largest democracy has been nurtured by the executive, judiciary, legislature, and the media.

“There are pressures on it but if these columns weaken, they will collapse and it will be difficult to make them stand again… I feel the only solution is what I can do as the government to ensure speedy justice,” Thackeray pointed out.

Referring to delays and “tarikh pe tarikh” (date after date) that burdens the common man, he said justice must be ensured as soon as possible, but it is also necessary to create a society free of crime so that the courts can be empty.

With the Law Minister also on the dais, CJI Ramana urged him to ensure a proposal to set up the National Judicial Infrastructure Authority is taken up in the upcoming Winter Session of Parliament.

“I have sent the proposal. I am hoping for a positive response soon and the Union Law Minister will expedite the process,” he said.

Responding in his speech, Rijiju said that there is “no politics” when it comes to the judiciary, and “we are just different organs of the system but we are a team”.

The CJI affirmed that Indian courts have repeatedly upheld the rights and freedoms of individuals, have stood up whenever people or society at large are at the receiving end of the executive’s excesses and assured that the seeker of justice, however weak, “need not worry about the might of the state”.