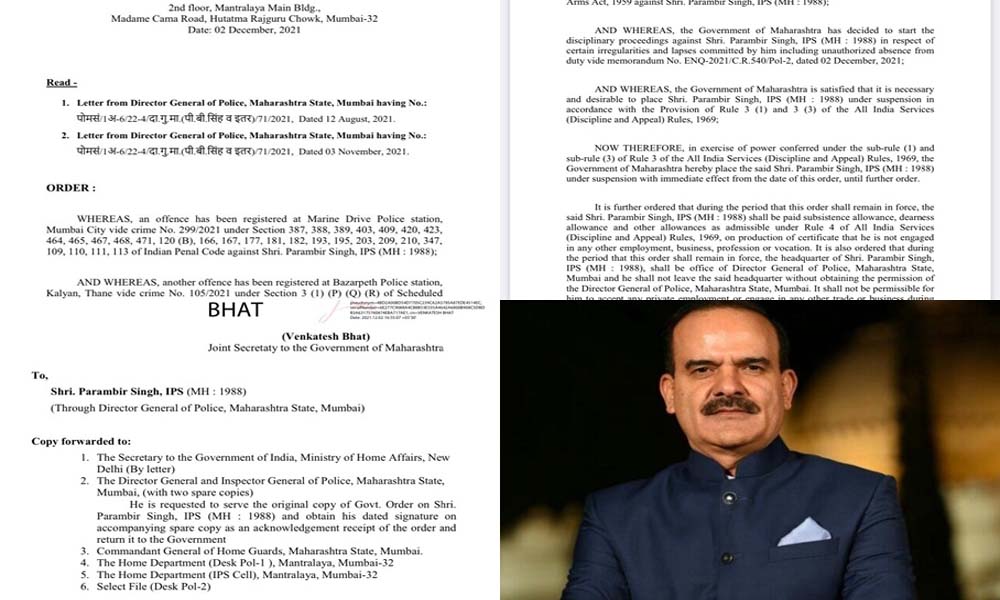 Mumbai : In a first-ever for Maharashtra, serving DGP-rank IPS officer Param Bir Singh, who is also a former Police Commissioner of Mumbai and Thane, has been suspended, and disciplinary proceedings launched against him for various lapses, it was announced on Thursday.

The decision by the state government to suspend the 1988 batch IPS officer – who was declared a ‘Proclaimed Offender’ by a Mumbai court in November – follows a probe report submitted by Additional Chief Secretary Debashish Chakravarti.

Among other things, the report had recommended action against Singh for defying the All India Civil Service Rules, sudden “unauthorised absence from duty” after which he became “untraceable” for nearly six months before he resurfaced a week ago (last Thursday) in Mumbai.

“The Government of Maharashtra is satisfied that it is necessary and desirable to place Param Bir Singh under suspensiona in accordance with the Rule 3(1) and Rule 3(3) of the All India Service (Discipline and Appeal) Rules, 1969,” said the 3-pager signed by Joint Secretary, Home, Venkatesh Bhat, and sent through DGP Sanjay Pandey, this evening.

Singh is facing several cases pertaining to extortion and corruption with complaints lodged in Mumbai and Thane, bailable and non-bailable arrest warrants, which were cancelled later, plus a probe by the government-appointed retired Justice K.U. Chandiwal Commission of Enquiry.

The state government will also probe the suspended officer for various “irregularities and lapses”, and unauthorised absence from duties, as part of the disciplinary action proceedings.