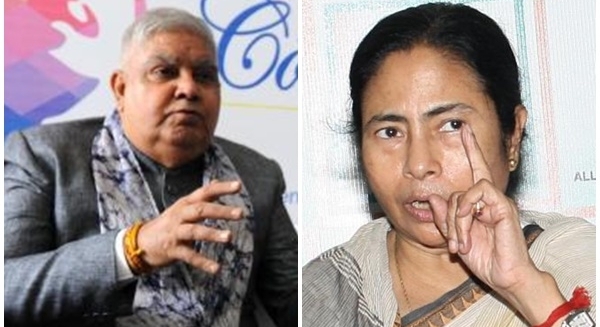 Kolkata,  A day after Chief Minister Mamata Banerjee asked Governor Jagdeep Dhankar to limit his travel according to the recommendations of the state government, Dhankar hit back at the chief minister and the government reminding her that no one is above the constitution and a constitutional post like that of the governor cannot be under the grip of the administration.

“What did the chief minister write to me? That I shall have to follow the recommendations of the state. This will bring the post of the governor under the grip of the administration,” Dhankar said after landing in Coochbehar in a BSF helicopter on Thursday.

“The governor will only go places recommended by the state. Should the constitution of India come under the administrative decisions of a government?” the governor questioned.

The Governor’s reaction comes after Banerjee wrote to him on Wednesday asking him not to take abrupt and unilateral decisions regarding his visit to any place and to follow the recommendations made by the government.

The chief minister also asked him not to go to Coochbehar without the recommendations of the state government.

“I find from social media that you are unilaterally proceeding to the district of Coochbehar on 13-5-2021 and, sadly, I find that to be violative of the long-standing norms as evolved over several decades. I, therefore, would expect that you will kindly follow the well-established norms of protocol, as stated above, and desist from abrupt decisions with regard to field visits,” she said.

After reaching Coochbehar to take stock of situation of post-poll violence in the district, the governor said, “There was election in four states and one union territory. There was no problem anywhere. Why is there a bloodbath only in Bengal? The rights of the people who have not given their support in favour of the party have been butchered. They had to pay the price with their lives.”

The governor blamed the chief minister for all this violence in the state. “It all started after she said openly that central forces will not stay forever and I was hurt when I saw that what she had said during the election ignoring the law and the constitution and law started from May 2,” he added.

Trinamool Congress, however, reacted sharply alleging that the governor has ignored the constitution.

“The Governor has crossed all limits. I would ask him to read the constitution where it has been specifically mentioned that the governor should work on the recommendations and suggestions given by the state,” a senior Trinamool Congress leader said.