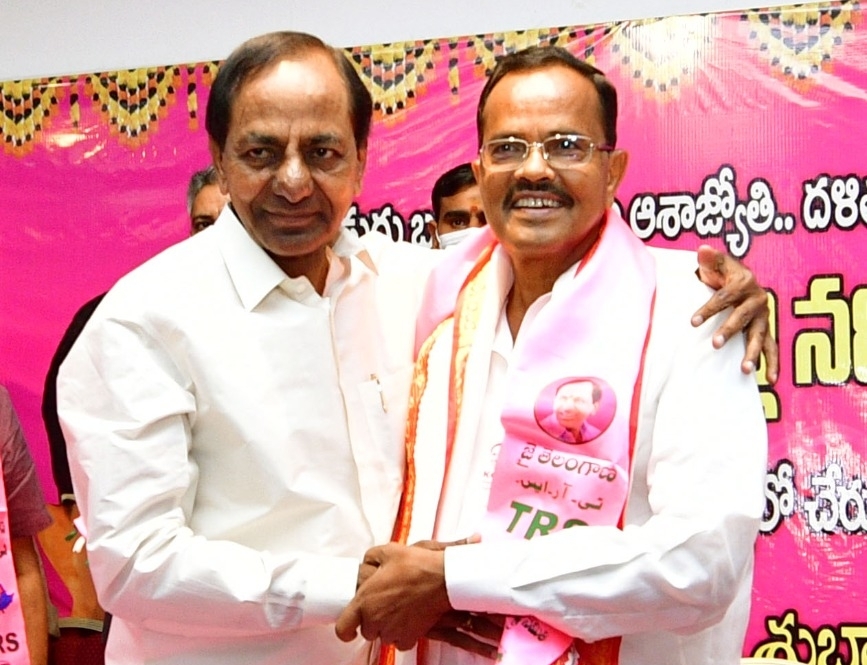 Narasimhulu, a Dalit leader, is likely to be appointed as chairman of Dalit Bandhu Corporation to oversee implementation of the scheme.

It was in 2019 that he had joined BJP after being expelled from Telugu Desam Party (TDP) for making allegations against the party leadership. He, however, quit BJP in July this year, alleging that the saffron party did not give him due recognition.

Narasimhulu, who was with the TDP since its inception in March 1982, has served as a minister in undivided Andhra Pradesh.

Welcoming him into TRS, Chandrasekhar Rao recalled that they worked together for many years. He claimed that his friendship with the former minister is beyond politics.

KCR, as the Chief Minister is popularly known, pointed out Narasimhulu is known as a leader who serves as the weaker sections of the society.

As a minister for energy, Narasimhulu has seen the power problems then faced by Telangana, he said, adding that he launched a movement for statehood to Telangana to solve the problems faced by the region.

He pointed out that those opposing statehood to Telangana tried to create fear among people that in a separate Telangana, Maoists will roam around with AK-47 rifles and the state will not receive investments.

He claimed that when he launched Telangana movement some people threatened to kill him but he was not afraid.

KCR said he convinced national parties to support statehood to Telangana and finally achieved the goal. He said he met BSP leader Mayawati alone 19 times to seek her support.

Stating that there is a vast difference between Telangana of that time and today, he claimed that people living in urban areas were looking towards villages for migration as the rural areas have transformed under the self-rule.

He reiterated that the government will definitely launch Dalit Bandhu like schemes for all castes, especially economically weaker sections, asking why rulers in the past never thought of launching a scheme like Dalit Bandhu.

He said BJP MLAs in Karnataka are demanding that schemes being implemented in Telangana should be launched in their state else Raichur district be merged with Telangana.

The TRS chief said there was no doubt that TRS will win another term in power.