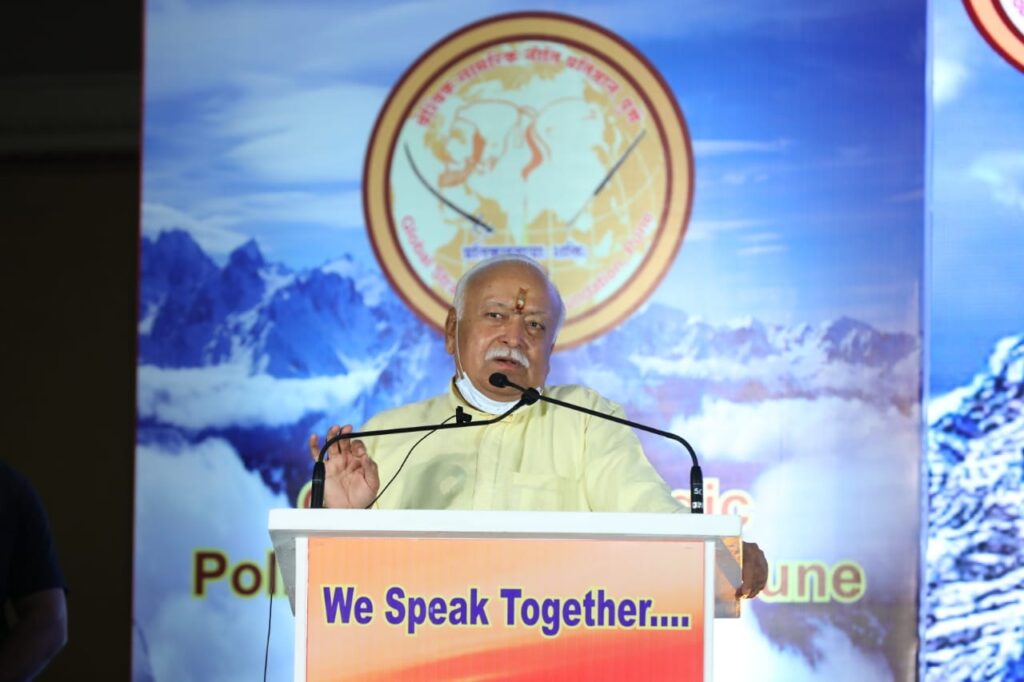 Mumbai : Wooing the minority community, Rashtriya Swayamsevak Sangh chief Mohan Bhagwat has reiterated that Muslims have nothing to fear in India, and they must work unitedly with the majority community for the common goal of the country’s progress.

Addressing an event — ‘Nation First, Nation Supreme’ — organized by the Pune-based Global Strategic Policy Foundation (GSPF), here late on Monday, the RSS Sarsanghchalak asserted that Hindus don’t harbour animosity towards anyone, and the two communities should join hands for the country’s development.

“Hindus and Muslims in India have common ancestry… It is a well-known historical fact that Islam came to India along with the invaders, and this should not be concealed,” Bhagwat urged.

He said that our beloved motherland and the rich heritage form the basis of integrity in the country, both have the same DNA and should strive together for the common good of the nation.

According to Bhagwat, Indians have always worked for the wellbeing of others, one and all, and the word ‘Hindu’ is synonymous with the country’s rich heritage, the ancestors and its varied culture, and “in this this context, every Indian is a Hindu for us”.

“In tune with our great culture, which accepts all diverse opinions, we commit that there won’t be disrespect for other aiths, but, for that we will have to ensure and think of dominance of India and not that of a particular faith as has been happening through appeasement or vote-bank politics for many years,” he said.

While the bonding and bonhomie are inevitable for the progress of the nation and the motherland, Bhagwat called upon the saner voices among the Muslims to speak out against the ‘insanity’ committed by some sections of the community, given the emerging geo-political developments in India’s neighbourhood.

“They must firmly oppose the hardliners in the community. This could be a long drawn task that will have to be done with great care and efforts. It’s like a tough, long test which we will have to pass. The quicker we begin, the lesser the damage to the society,” Bhagwat pointed out.