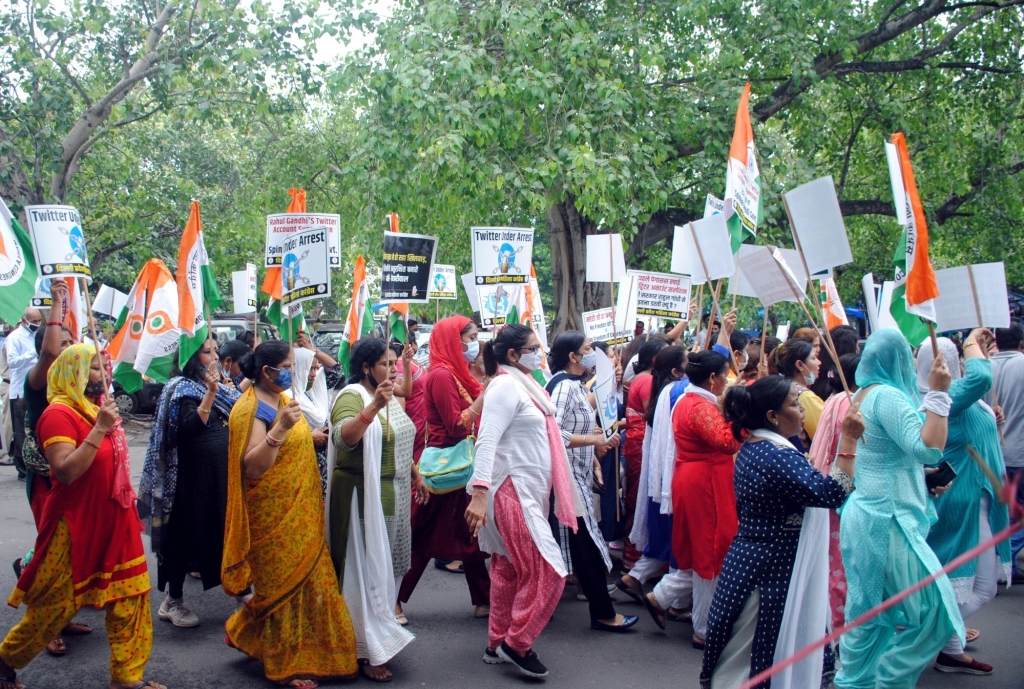 The key demand of the protest was the continuation and resumption of Rahul Gandhi’s account.

“At the times when people need support from government in various economic and social forms the Modi government instead of working and improving their poor management techniques is using cheap stunts against the opposition,” alleged NSUI President Neeraj Kundan.

The Youth Congress said that the Modi government is conspiring to suppress the voice demanding sympathy and justice for the rape victim.

“Modi ji will not be able to suppress the voice of justice for the daughter by intimidating Twitter, or by blocking the account of Shri Rahul Gandhi ji.”

He said, the British government used to be very afraid of the unity of India, now someone else has taken their place. Let the BJP government understand that there is nothing to fear in fighting for the country, so we will fight and keep fighting. The one who fights for daughters will sting in the eyes of this government,” said B.V. Srinivas, Youth Congress president.

The Mahila Congress too protested on the issue.

The Twitter account of former Congress President Rahul Gandhi was blocked on Saturday, after the NCPCR flagged the issue, of his photos with the victim’s parents, on the social media platform.

The Congress alleged that BJP is trying to silence its voices but it will not stop. “The rape and murder of the 9-year-old is not an issue, but the tweet is,” said Ragini Nayak.

Gandhi on Wednesday met the family members of the 9-year-old victim who was raped and killed and demanded justice for them. The minor girl was allegedly raped, murdered, and cremated without her parents’ consent in Old Nangal crematorium recently.

But the BJP alleged that Rahul Gandhi has revealed the identity of the victim’s family which is unlawful.

Following the complaint by the NCPCR, Gandhi’s Twitter account had been temporarily suspended and the party, from his official handle, tweeted that due process is being followed for its restoration.

It said that until then, Gandhi will stay connected with all his other social media platforms and continue to raise his voice for people and fight for their cause.

Rahul Gandhi joined Twitter in April 2015 and has 19.5 million followers on the social media platform.