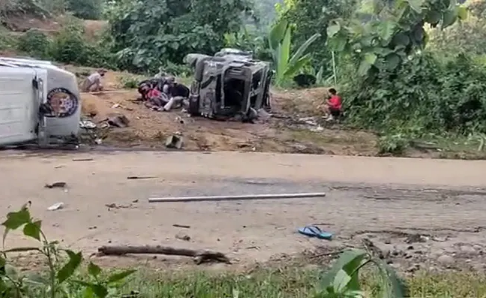 Silchar (Assam): As the Assam-Mizoram border row turned violent on Monday with a spate of clashes and five Assam Police personnel being shot dead, Union Home Minister Amit Shah talked over phone with both the Chief Ministers and urged them to maintain peace and protect the people.

Assam Chief Minister Himanta Biswa Sarma, who on Tuesday rushed to the border area, said that to protect the state’s reserve forest, his government would soon move the Supreme Court and deploy three commando battalions, comprising 4,000 personnel, along the inter-state border.

He said Assam would, at any cost, protect its territory and the reserve forest along the Mizoram border for the sake of the future generations.

Paying tributes to five killed policemen, he announced a government job and Rs 50 lakh as compensation to their next of kin and Rs one lakh for the 42 policemen and civilians injured in the border firing and clashes.

Referring to Monday’s firing from the other side, Sarma urged his Mizoram counterpart Zoramthanga to probe how a section of the civilians are carrying and using sophisticated arms.

“If the civilians of Mizoram carry sophisticated arms and ammunition, it would not only be very harmful for Assam but would be dangerous for Mizoram as well.”

He also assured that his government would provide security to the Mizo people, traders and students in Assam.

“We would not encroach an inch of land of Mizoram and we would die but would not allow them to take over an inch of our territory as well,” the emotional Chief Minister told the media after holding a series of meetings with officials.

Sarma said that the Union Home Minister, during his meeting with all the eight Chief Ministers of the northeastern states on Saturday in Shillong, had announced that the inter-state border disputes would be resolved before India celebrates 75 years of Independence next year.

Citing satellite imagery, he said that it is evident from many documents and evidence that reserve forest lands of Assam are occupied by Mizo people, who destroy the forest resources.

“It might be that some people in Mizoram are annoyed after the Assam government curtailed the drugs trading chain from Myanmar to other parts of India via Mizoram and Assam,” he claimed.

An Assam government statement said that there was unprovoked firing from the Mizoram side as its senior state officials, led by an Inspector General of Police, had requested Mizoram Police and officials to dismantle unauthorised constructions on the Assam side, leading to the death of five policemen, including a sub-inspector, and injuries to many other security personnel.

“The Assam officials suddenly were surrounded and attacked by a mob of miscreants, brandishing weapons and wearing helmets, from the Mizoram side and that was visibly supported by the Mizoram Police.

“While the mob pelted stones on the Assam officials and destroyed three vehicles including the Deputy Commissioner’s car, the Mizoram Police simultaneously fired tear gas shells on the delegation. The IGP was injured in this barrage.

“Horrifically, even while SP, Kolasib district (of Mizoram) was in talks with the Assam officers, the Mizoram Police opened fire on the Assam officials and civilians, who had by then gathered there, from two dominating high features with automatic weapons including Light Machine Guns.

“The Assam Police and officials have shown remarkable restraint in the face of an unimaginably horrific attack on them that is borne out by the fact that there are no casualties on the Mizoram side…,” the statement said.

He also claimed the Assam Police also damaged several vehicles travelling along the National Highway between Vairengte and Lailapur.

“The confrontation continued and a volley of tear gas canisters and grenades were launched at Mizoram Police followed by firing from the Assam side.

“Mizoram Police responded spontaneously by firing back at Assam Police in spite of the fact that SP, Kolasib District was still inside CRPF duty camp negotiating with the Assam Police authorities,” Lalchamliana said in a statement.

The Mizoram Government “strongly condemns the unjustified act of the Government of Assam in this intrusion and aggression into the territory of Mizoram”, it said.

According to Assam Police, since October last year, several inter-state border skirmishes have taken place along the 164.6 km border in which one man was killed, and over 50 people injured, besides large scale damage caused to properties, including government-run schools, shops and houses along the border.

The Assam Chief Minister had claimed that 1,777 hectares of forest land in the three districts bordering Mizoram have been encroached by Mizos, but Mizoram Chief Secretary Lalnunmawia Chuaungo dismissed it, saying that these lands had been with residents of Mizoram’s border villages for over 100 years, and hence, there is no question of encroachment.

Lalchamliana had also alleged that crops of Mizo farmers had been destroyed at Buarchep in Kolasib by the Assam Police earlier this month and demanded compensation.

The Assam-Mizoram border troubles were controlled last year following the intervention of the Union Home Minister, top Home Ministry officials, and Chief Ministers of both states and then the central paramilitary troops were deployed along the border to prevent fresh troubles.

But since June 29, the troubles along the borders have resumed after the two states accused each other of encroachment at Aitlang hnar near Mizoram’s Vairengte, which borders Assam’s Hailakandi district.

Tension further shot up when Assam officials reportedly destroyed some plantations at Buarchep on July 10 during eviction, while claiming that the people from Mizoram encroached more than six km into its territory.

Assam shares borders with six other northeastern states and has boundary disputes with four – Nagaland, Arunachal Pradesh, Meghalaya besides Mizoram. Following clashes, Central para-military forces had been deployed on the borders.