Bhopal: Bhopal MP Pragya Singh Thakur, who is known for making controversial statements, on Sunday evening, said that Bhopal was lucky that she was elected from there and that the local people voted for dharma (righteous way of life).

Talking to local media persons on Sunday, the MP took potshots at Rajya Sabha MP Digvijaya Singh who had contested against her in the Lok Sabha poll in May 2019, but lost by a huge margin.

She said that adharma was trying to make base in Bhopal at that time (before LS polls). There was a misgovernance of 15 months in place and all attempts were made to plant adharma in Bhopal. “But the people of Bhopal, the Hindus, youth gave such a beating to them that they are not even getting water anywhere. The best way to finish off people with wicked policies is to finish off their politics. Now, they are going from door to door to save their existence, but are surrounded by enemies everywhere,” Pragya said without naming Singh.

She went on to say that the people of Bhopal might remember in what circumstances she was brought in to contest elections. She then added “it was good luck for Bhopal when I was getting elected from here, Bhopal was the focal point of the entire country”.

“And you lucky people voted for dharma,” she said.

The MP further issued a warning to the Bhopal municipal administration saying that it cannot stop the people from undertaking the Hindu ritual of tarpan (paying tributes to forefathers). She said that she had come to know that the administration was stopping people from accessing water bodies for the rituals, but such moves against Hindu culture will not be tolerated.

Meanwhile, vice-president of MP Congress media cell, Bhupendra Gupta, said that the statements of Pragya Thakur were so illogical and baseless that it was futile to comment over them. He said that the MP was nowhere to be seen to support the people of Bhopal who are fighting the COVID-19 crisis and now she is calling them lucky for having elected her. Gupta said that BJP always lands in soup whenever Pragya Thakur makes a statement and it takes them a week to clarify things. This is one of such statements, he said. 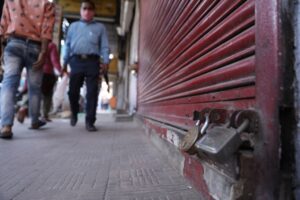