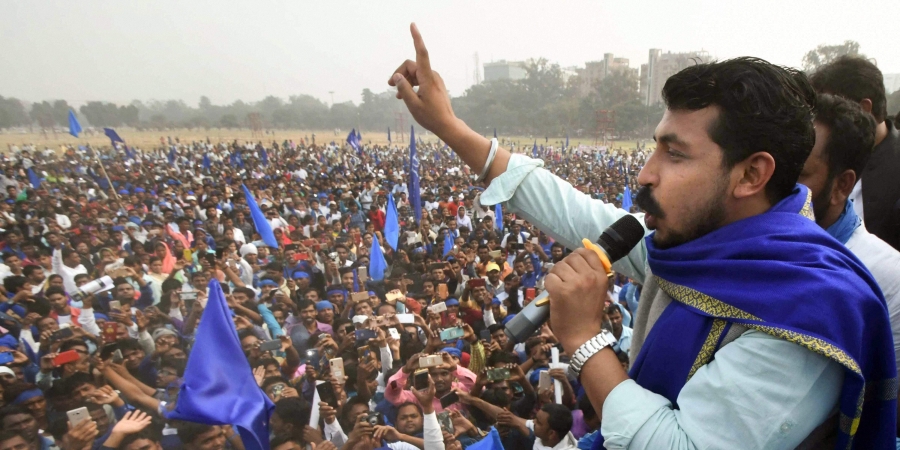 Lucknow: The Bhim Army has started preparing for the next Assembly elections in Uttar Pradesh, due early next year.

The Bhim Army volunteers, under the banner of Azad Samaj Party, will embark on a cycle yatra from July 1 and visit all blocks and villages to create awareness on the need of preventing division of votes in the Uttar Pradesh Assembly elections next year.

Talking to reporters, Chandra Shekhar Aazad said, “My aim is to muster the support of at least 85 per cent people from the Bahujan Samaj. We are going to organise ‘Bahujan Brotherhood Conferences’ in the entire state and we will explain the value of vote to the people. We will ask them not to waste their vote if they want a secure future for themselves.”

He said that the 2022 elections in Uttar Pradesh will give a chance to the people to decide what they want for the next five years. It will give an opportunity to decide their own future.

The Bhim Army chief continues to be cautious while talking about the Bahujan Samaj Party (BSP) and his relationship with the party.

Referring to the recent expulsion of leaders from the BSP, he said, “When any leader suddenly expels the leaders of his party, it is clear that the leader has become a dictator and not a leader. If someone has made any mistake or there is any complaint against him, then he should be given a chance to present his side. That is what democracy is. But, if someone removes a worker who has been working for 25 years without a valid reason, it is not justice.”

He said that he would welcome all such leaders or workers who want to take forward Kanshi Ram’s movement.

“I welcome all the leaders who want to take forward the movement of social change that has been stalled. Although I have not made any such effort yet, if those who have been expelled want to join us, I will welcome them,” he said.

He pointed out that the expulsion of Ram Achal Rajbhar and Lalji Verma, the two leaders who were founder members of the BSP, has not gone down well with the Bahujan Samaj.

Asked about alliances, the Bhim Army chief said that he would ally only with those forces that are genuinely wanting to work for the upliftment of the downtrodden and poor.

“The BJP is completely anti-Bahujan. We cannot have an alliance with them. BJP takes votes in the name of Keshav Prasad Maurya but makes Yogi Adityanath, a Thakur, the Chief Minister. This is an insult to democracy. Our battle will now be for the caste census and reservation in promotion,” he said.