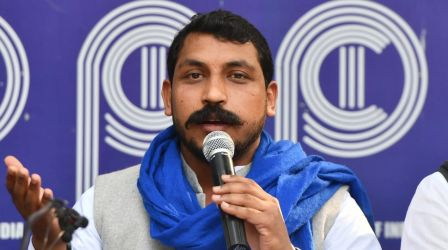 Lucknow : The Samajwadi Party-Rashtriya Lok Dal alliance is all set to welcome a new member into their fold — the Bhim Army led by Chandra Shekhar Aazad.

Though a formal tie-up with the Bhim Army has not yet been announced, Chandra Shekhar has been campaigning in Khatauli and Rampur for the SP-RLD candidates.

His presence in the campaign is likely to woo Dalit voters to the SP-RLD fold since the BSP is not contesting the bypolls.

According to sources, it is RLD chief Jayant Chaudhary who has brought Akhilesh Yadav and Chandra Shekhar together and helped the two leaders iron out their differences.

It may be recalled that on the eve of the Uttar Pradesh Assembly elections earlier this year, the proposed alliance between the SP and Bhim Army had snapped due to ‘misunderstandings’ between Akhilesh and Chandra Shekhar.

Chandrashekhar, who has been featured by the Time magazine in its annual list of ‘100 emerging leaders who are shaping the future’, was in Rampur on Wednesday and met SP veteran Azam Khan to extend his support to the party SP candidate in the fray for the Assembly bypoll.

He has already been campaigning with Jayant Chaudhary for the Khatauli Assembly bypoll.

Sources in the SP said there have been several rounds of talks between the RLD chief and Chandrashekhar wherein the two have discussed at length the modalities of coming together for the bypolls.

The SP and RLD leadership is keenly watching the impact that Chandra Shekhar Aazad will make in the bypolls in Khatauli and Rampur.

SP sources said that Chandra Shekhar’s presence in the SP-RLD alliance was likely to make a positive impact on the overall political scenario in Uttar Pradesh.

“Chandra Shekhar can be projected as an alternative to the BSP since he wields considerable influence among Dalits in western UP,” said a senior party leader.

Chandra Shekhar has shown an inclination to side with the SP-RLD alliance for the 2024 polls, but a formal discussion on the issue was yet to take place.