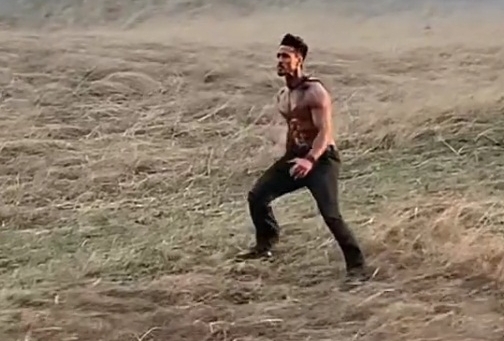 Mumbai,  Even a machoman can buckle under extreme conditions, ask Tiger Shroff. On Thursday the Bollywood action star, with a dash of candid humour, posted a couple of video clips on Instagram where he struggles to pull off stunt sequences that depict him as the infallible hero on screen.

In the first clip, a shirtless Tiger struggles to stand straight and look intensely at approaching helicopters, owing to storm fans that are operating on the set. In the second, he fumbles while trying to tear off his shirt amidst sub-zero temperature. Both videos seem to be from the Baaghi franchise of films.

“A couple of hero shot ‘fails’ in 1 i couldnt stand firmly in one place with a heroic pose as i look on at the choppers cause of the intense storm fans…and two couldn’t even rip my shirt off cos it was so cold (-7) either that or im just a weakling making excuses,” wrote Tiger, with his post.

The actor completed seven years in Bollywood in May. Tiger stepped into films with the 2014 release “Heropanti”. His notable films include the “Baaghi”, “Student Of The Year 2” and “War”.

His upcoming slate of work includes “Heropanti 2” and “Ganapath”.