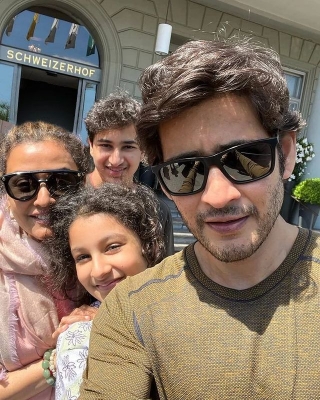 Hyderabad, Telugu superstar Mahesh Babu is currently enjoying the success of his film ‘Sarkaru Vaari Paata’, which was directed by Parasuram. He and his family are having a great time on vacation in Europe.

The actor shared a photo of himself with Namrata Shirodkar, Gautham, and Sitara on his Instagram account. Mahesh appears to be really enjoying his road trip in Europe, as he hints at their next destination.

“Road trip it is!!” he wrote. Italy is up next!! Lunch with the crazies!!”, Mahesh captioned. The photo has gone viral on social media.

Mahesh Babu’s next film will be an action-comedy directed by acclaimed filmmaker Trivikram. Soon, he’ll reportedly join the set of ‘SSMB28’ (working title), in which Pooja Hegde will star as the lead heroine.

Mahesh also has a film with SS Rajamouli in the works, which will begin shooting later this year.