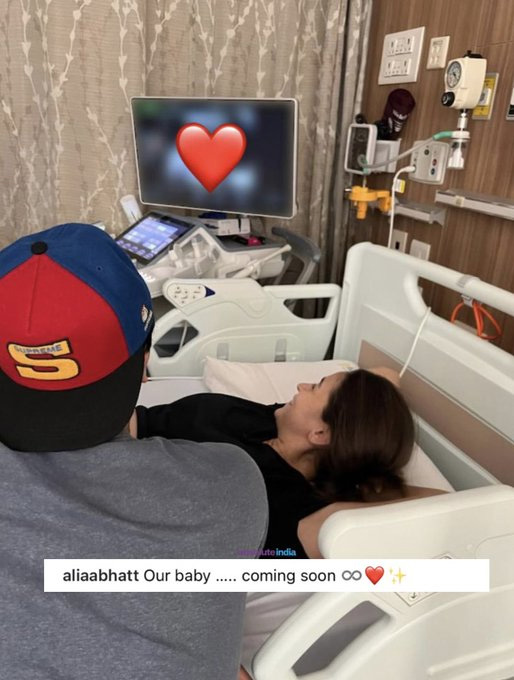 Mumbai: It’s time for the newlyweds to celebrate again. The prettiest couple in Bollywood is expecting their first child. Yes, you read that right! The ‘Gangubai Kathiawadi’ star took to her social media on Monday to announce her pregnancy grandly. Fans are ecstatic and are yin awe of the two.

Alia shared a sweet message on the arrival of a new family member. The beautiful photo shows her husband, Ranbir Kapoor, staring at the ultrasound equipment. Alia The news, along with the photo, went viral on social media minutes after the announcement.

As soon as the post was shared, Alia’s followers and acquaintances in the business congratulated the pair in the comments section. Many Bollywood superstars, including Karan Johar, Priyanka Chopra, Vaani Kapoor, Tiger Shroff, and others, flocked to social media to express their love and best wishes to Alia and Ranbir.

Karan Johar, the Bollywood producer who debuted Alia Bhatt and is also a father figure to the starlet, wrote, “Heart is bursting” while Parineeti commented, “Congratss lovers. (sic)”

Son Razdan, Alia’s mother, also commented in the section, saying, “Congratulations Mama and Papa Lion,” while Kriti Sanon wrote, “Omg, congratulations.” Riddhima Kapoor Sahni, Ranbir’s sister, confirmed the news with a social media post including a snapshot of the pair. Riddhima stated, “My babies are having a baby. I love you both so much.”

After dating for nearly 4 years, Bhatt and Kapoor married on April 14, 2022, in a modest ceremony. The two actors will feature together in Ayan Mukerjee’s next film ‘Brahmastra,’ which will be released in September.