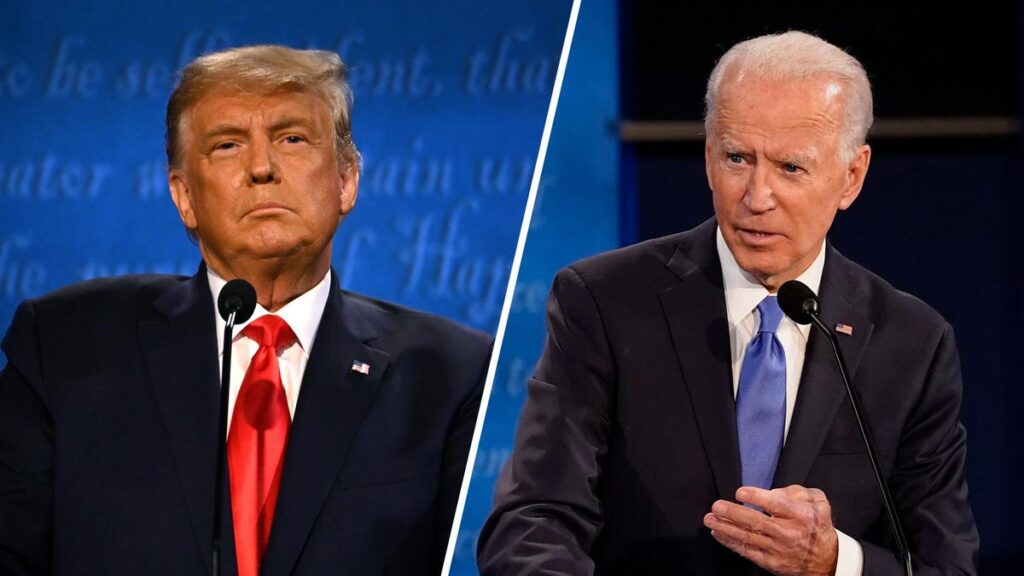 Washington : With just 11 days left for the November 8 midterm polls in the US, former President Donald Trump has gone from bad to worse in approval ratings, while incumbent President Joe Biden shows only marginal improvement as voters are divided on important issues like inflation and abortion rights, while swing ballots hold the key in at least eight battleground states.

In the upcoming election, all 435 seats in the House of Representatives and 35 of the 100 seats in the Senate will be contested.

The results will determine the 118th US Congress.

In the Senate, the Democrats and Republicans split 50:50 with Vice President Kamala Harris holding the edge for the Democrats with her tie breaking vote.

In the House, Democrats have a wafer-thin majority of 220 seats and Republicans 212, with three seats vacant.

The two parties want to retain their numbers and the Republicans appear set to increase it.

These are the states on which an electoral victory hinged in the 2020 elections and the scenario remains much the same in 2022.

Biden is no exception to the rule that an incumbent President has lost the midterms referendum as he battles a powerful rhetoric from Republicans led by Trump who are constantly harping on ‘Bidenomics’ going bad causing inflation to peak to the highest level in 40 years, job losses and unemployment peaking. But all of this is not really true.

Actually, Biden has inherited a legacy of bad economic management from Trump who refused to close down establishments and work spaces during the Covid-19 pandemic causing loss of lives and livelihood.

A BBC investigation showed that Biden succeeded in increasing the employment situation by adding 60,000 jobs a month in 2021 against both former President Bill Clinton and Trump, both of whom added only 30,000 jobs a month during their presidency, economic analysts say.

Biden is very strong on restoration of women’s abortion rights overturned by the Supreme Court some months ago as it scrapped the 1973 Roe vs Wade judgement that upheld abortion rights of women for a good 39 years.

Biden signed an executive order allowing Americans to travel overseas and within states to get abortion done to terminate pregnancies borne out of incest, rape and deformities of foetus. And corporates such as Microsoft, Netflix, and Amazon offered their employees cash benefits for out of state abortions.

Women voters are solidly behind Biden on this but the string of progressive legislations like the inflation reduction act with a spend of $750 billion, capping the price of prescription drugs ($35 for insulin dosage) and bringing health care costs through insurers more affordable , waiving of education loans for family incomes below $10,000, the CHIPS legislation to make semiconductors within US reducing dependence on China that would create thousands of jobs are yet to strike a chord with voters who are swayed by the republican propaganda of grocery and gas prices making life difficult for Americans.

GDP numbers have dipped in three successive quarters but economists believe that’s no indication of an impending recession as a full year’s numbers are needed to make that forecast. But republicans have been fanning fears of recession among voters.

That Trump has been able to have a strong hold on the Republican Party as the strongman is remarkable even as friends turn foes and funders shy away as his legal baggage is increasing day by day.

Trump is under fire from the congressional panel probing the January 2021 Capitol riot for an alleged involvement to incite right wingers who invaded the Capitol Hills to overturn a popular mandate endangering the lives of policemen and Senators, including former Vice President Mike Pence.

Trump faces both civil and criminal suits from the New York Attorney General’s office led by Letitia James (Democrat), accusing him of systematic fraud on the government by inflating property values, securing enormous loans with “fraudulent claims” and evading taxes by “false claims”.

The seizure of the 11,000 documents from his Florida residence by the FBI and Department of Justice (DOJ) claiming they came under the espionage act as they related to FBI, CIA and IC reports on countries inimical to the US and the Trump selected special master district court judge James Dreary showing no concessions on review by the former President’s legal team of national security documents has only added to his legal woes with the Republican National Congress (RNC) not willing to pay out the bills.

But Trump has his own war chest through his social groups such as ‘Save America’, ‘Make America Great Again’ and ‘Truth Social’, though his website is tottering for finance, claim his campaign managers.

While Trump’s USP is inflation and unemployment and Biden’s USP is restoration of abortion rights that would bring out women voters in the hordes. Inflation is striking a response from the swing voters. Who are they? They are generally the ethnic and young unemployed Latino voters.

The educated college youth is throwing in its lot with the democrats especially with the loan waiver or forgiveness though its run into some problems as republicans oppose it as an extravagant vote catching spend.

The London Economist in a report says America’s midterm elections looks likely to deliver bad news for the Democrats. At the half-way mark between presidential elections, voters routinely give the incumbent party a beating.

In late summer, despite high inflation and low approval ratings for Biden, Democrats had seemed to be in with a good chance of keeping the Senate, and even, perhaps, the House.

The party has notched up some notable legislative achievements this year; its message to voters was sharpened after a stunning decision by the Supreme Court to end America’s constitutional right to abortion. But just a few weeks out from the election, polls and forecasts put the Republicans in a stronger position. Their chances of taking the Senate are improving, The Economist said.

Democrats are polling best in states where surveys tend to misfire, media reports say. However, polls in right-leaning states have most overestimated support for Democrats recently. The party campaigns American democracy is under threat are also having an impact with voters and dividing the nation along partisan lines.

The midterm elections could leave democracy weaker ahead of the 2024 presidential race, according to media reports. As the homelessness situation in some of the democratic strongholds worsens, it brings with it a political liability for the Democrats.

As the midterms pave the way for a 2024 presidential scenario, a USA TODAY report said that Americans remain decidedly unenthusiastic about the prospect of a Biden-Trump rematch.

If the January 6 Congressional panel releases an interim report it could considerably dent Trump’s chances and improve Democrats’ hopes.

Trump and Biden have both indicated they hope to run for the 2024 presidential race. Sometime after the results are in for this year’s midterm elections, now just 11 days away.

Large majority of the people don’t want either of them and want new faces like Gavin Newsom of California (Democrat) and Ron DeSantis of Florida to run for President, though the latter has suffered an image damage by sending a planeload of immigrants to Martha’s Vineyard in Michigan state run by Democrats.

However, the Republican support seems to rise ahead of Election Day, with inflation driving voter’s choice, say media reports.

And in a prospective presidential race, Biden leads Trump 46 per cent-42 per cent — a 4-point margin that mirrors Biden’s 4.2-point defeat of Trump in 2020.

That’s the same 4-point margin Biden held over Trump, 45 per cent-41 per cent, in the USA TODAY/Suffolk poll taken in July.

Biden’s bad numbers get better, say media reports quoting pollsters who claim that by 64 per cent-26per cent%, voters don’t want the President to run for a second term. Those findings are nothing to brag about, but they are a bit of an improvement from the summer when those surveyed by 69 per cent-22 per cent didn’t want him to run, reports said.

Biden’s standing among Democrats has significantly brightened. By 45 per cent-43 per cent, they now say they want him to run. In July, only 35 per cent Democrats wanted him to run; 50 per cent didn’t.

Trump’s bad numbers get worse, says the poll. By 68 per cent-27 per cent, voters don’t want Trump to run for a second term. Those findings have deteriorated a bit since the summer when 65 per cent-28 per cent of voters wanted him to forgo another bid for the White House.

Trump’s standing among Republicans is declining though he remains still more popular within his own party than Biden is in his.

Republican voters by 56 per cent-39 per cent want Trump to run again. That’s a decline of a few points from July when by 60 per cent-34 per cent Republicans supported another race, the survey found.

Biden’s job-approval rating has risen since the summer to 44 per cent approve-53 per cent disapprove. His standing is still underwater by 9 points, but it beats his July rating of 39 per cent-56 per cent.

In the new poll, the President’s favourable-unfavourable rating is 45 per cent-51 per cent.