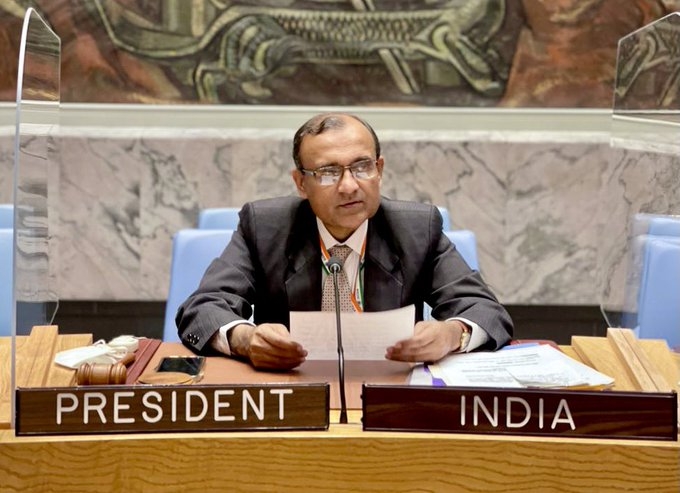 United Nations,  Presiding over an acrimonious UN Security Council (UNSC) session on Syria that pitted the US and its allies against Russia and China, India’s Permanent Representative T.S. Tirumurti warned against terrorists getting hold of chemical weapons.

“India has been repeatedly cautioning against the possibility of terrorist entities and individuals gaining access to chemical weapons,” he said on Wednesday during the session that was briefed on chemical weapons and Syria.

“We are concerned at the frequent reports of resurgence of terrorist groups in the region. As we have learnt from the consequences of complacency against terrorism in the past, the international community cannot afford to ignore terrorist activities in Syria and the region.”

The first open session showed the challenges Tirumurti faces in leading a Council driven by the interests of veto-wielding permanent members and guiding them out of its paralysis to minimal consensus on the most polarising issues.

As the Western countries and Russia and China continued their long-standing feud over the issue of the use of chemical weapons in Syria, Tirumurti pleaded for cooperation and understanding in dealing with it.

Tirumurti recalled that the Council voted unanimously last month on a resolution to extend the use of a border crossing to allow humanitarian aid to Syrian people.

“We showed to the world that progress on the Syria file, even after a decade of conflict and impasse, is still possible, provided we were all willing to walk that extra step and work in tandem while taking cognizance of each other’s concerns. Let us show the same resolve with regard to the chemical weapons discussions.”

Another area of confrontation, the Russia-Georgia conflict, that had come up in closed consultations spilled outside the Council in clashing briefings by the US and its European allies and Russia.

The US and its allies are opposed to the regime of Syrian President Bashar al-Assad and accused him of using chemical weapons besides other grievious human rights abuses on a massive scale.

But China and Russia back al-Assad and defend him against the chemical weapons charges.

Since both sides have veto powers, the Council has been at an impasse over Syria, a nation in the throes of a decade-long civil war.

Wednesday’s was the first session of the Council with an open debate after India assumed the Council’s presidency and all the other 14 members, including China’s delegate Sun Zhiqiang, greeted Tirumurti wishing him success.

The session started off with a briefing by Thomas Markram, the deputy to the UN High Representative for Disarmament Affairs, on the report of the director-general of the Organisation for the Prohibition of Chemical Weapons (OPCW).

He said that the Assad government’s claims that it had no chemical weapons programme cannot be accepted because of inconsistencies and discrepancies in its assertions.

Syria must fully cooperate with the OPCW’s Technical Secretariat to resolve all outstanding issues before the international community can be assured that its chemical weapons programme has been eliminated, Markram said.

US Permanent Representative Linda Thomas-Greenfield said: “The Assad regime, supported by Russia, continues to ignore calls from the international community to fully disclose and verifiably destroy its chemical weapons programmes. Instead, the Assad regime continues to deliberately delay and obstruct the work of the OPCW.

“It is disappointing that the use of a weapon of mass destruction by a government against its own people could possibly be a source of political conflict in this Council.”

Russia countered by saying that the politicisation of the OPCW to further “the geopolitical ambitions of some states” threatened its credibility.

Russia’s Charge d’Affaires Dmitry Polyanskiy disputed various aspects of the OPCW report asserting that it was full of contradictions.

He also raised a missile strike on a Syrian facility in June that Damascus has blamed on Israel. He said that the attack destroyed two gas cylinders linked to a gas attack in Douma in 2018 that were kept there pending possible transfer to The Hague for examination as evidence.

The other confrontation of the day was the 13-year conflict between Russia and Georgia involving Abkhazia and South Ossetia.

Indicative of the tensions behind the closed-door consultations over the issue, Russia and the US and allies held duelling media encounters outside.

The US and five Western European members of the Council came out after a closed consultation and made a joint statement condemning what they said was “Russia’s illegal military presence and exercising of control over Abkhazia and Tskhinvali Region/South Ossetia, integral parts of Georgia, and its steps toward annexation of these Georgian regions. Russia’s actions are in clear violation of international law.”

Estonia’s Deputy Permanent Representative Andre Lipand, who read out the statement to reporters, said in reply to a question that “we will continue to focus on this issue in the Council and will not let go without recourse”.

Abkhazia and Southern Ossetia declared independence from Tbilisi and broke away with Russian troops fighting Georgia. Moscow’s troops continue to be stationed in the two regions.

Polyanskiy told reporters that he did not see any role for the Council in the matter.

“This is only their phantom pain and that independent Abkhazia and South Ossetia is the reality which cannot be ignored,” he added.