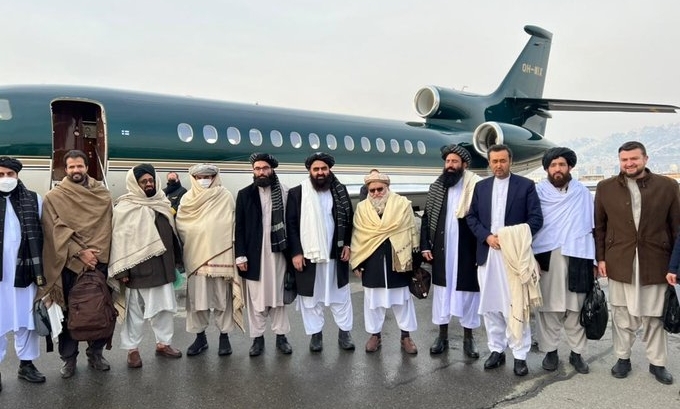 Kabul : A visiting Taliban delegation led by acting Foreign Minister Amir Khan Muttaqi met a group of Afghan civil society members in Oslo, during which the two sides reportedly agreed to work together for the betterment of the war-torn nation, according to media reports.

A statement issued by the Ministry of Foreign Affairs in Kabul after the meeting on Sunday said the “participants listened patiently to each others opinions and exchanged views on the current situation in the country”.

“They affirmed that Afghanistan is the shared home of all Afghans, and stressed that all Afghans need to work together for the political, economic and security prosperity of the country.

“The participants of the meeting recognized that understanding and joint cooperation are the only solutions to all the problems of Afghanistan.

“All participants, with one voice, declared such meetings to be in the interest of the country,” the statement added.

The names of the Afghan civil society members have not been disclosed yet.

Taking to Twitter, the US special envoy for Afghanistan Thomas West, who is also presently in Oslo, said he welcomed Norway’s taking the initiative to hold the meeting.

“Welcome our hosts’ initiative to bring Afghan civil society and Taliban together for dialogue. Civil society leaders are the backbone of healthy and prosperous economies and societies, he said.

“As we seek to address humanitarian crisis together with allies, partners, and relief organization, we will continue clear-eyed diplomacy with the Taliban regarding our concerns and our abiding interest in a stable, rights-respecting and inclusive Afghanistan.”

The delegation landed in Norway on Saturday night. This is their first visit to Europe after the Taliban took over Afghanistan in August 2021

They are also scheduled to meet authorities of Norway and members of the international community, including US officials, as well as attend a summit on Afghanistan.

“In the first meeting with the Americans, the release of the Afghan assets, the removal of the blacklist, and also the resumption and extension of bilateral ties will be discussed,” TOLO News quoted Taliban deputy spokesman Inamullah Samangani as saying.

However, the official invitation of the Taliban delegation to Norway faced diverse reactions.

A movement named “Afghanistan Women’s Government in Exile” in a statement accused the Taliban of violating human rights and criticised the Norwegian government for inviting the Kabul delegation.

Some Afghans living in Europe staged protests in Oslo over the talks as well in front the Norwegian embassy in London.