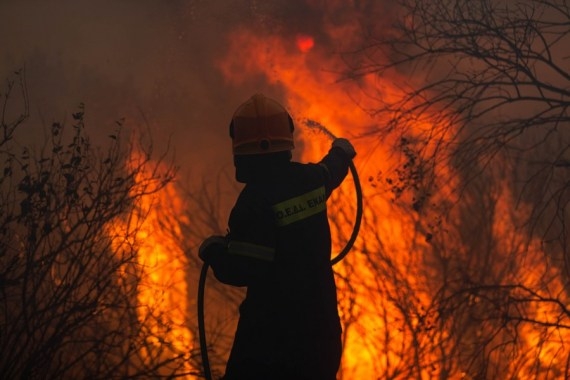 Athens, A 38-year-old man assisting in dousing a raging wildfire in the north of Athens has died, while over 40 others have been injured as devastating fires have continued to spread across Greece.

The man was transferred to a hospital with serious head injuries on Friday after being hit by a falling electricity pole, Xinhua news agency reported.

At least 44 people were transferred to hospitals due to injuries sustained in the fires in Attica, Peloponnese and Evia, Health Minister Vassilis Kikilias said on Friday.

Deputy Minister for Civil Protection and Crisis Management Nikos Hardalias said earlier in an emergency briefing that there were 56 active fire fronts in different parts of the country, stressing that the conditions were “extremely dangerous”.

Fires continued to rage across the country for the fourth day on Friday in northern Athens, on Evia island, in Ilia prefecture and Mani in Peloponnese, forcing hundreds of people to evacuate, destroying houses, businesses and burning thousands of hectares of forest land.

Foreign officials from France, Spain, Kuwait, Jordan, Turkey, the US and China, among other countries around the world, have sent messages of solidarity to Greece.