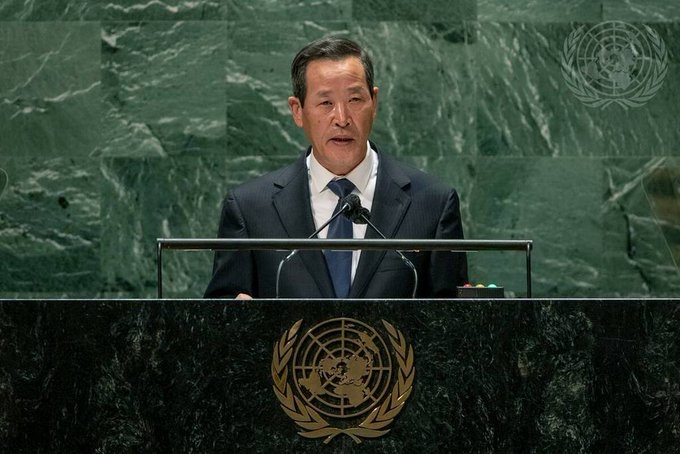 Seoul : The US must permanently stop its joint military exercises with South Korea and the deployment of its strategic weapons to the South if it wishes to promote peace on the Korean Peninsula, Pyongyang’s UN Ambassador said.

In his address to the UN General Assembly on Monday, Kim Song, the chief of North Korea’s mission to the US, also said a good relationship may be formed between Pyongyang and Washington if and when the latter gives up its hostility toward his country, Yonhap News Agency reported on Tuesday.

“If the US wants to see the Korean War, the most prolonged and long-lasting war in the world, come to an end, and if it is really desirous of peace and reconciliation on the Korean Peninsula, it should take the first step toward giving up its hostile policy against North Korea by stopping permanently the joint military exercises and the deployment of all kinds of strategic weapons.

“I am convinced that a good prospect will be opened for the US-North Korea relations and inter-Korean relations if the US refrains from threatening North Korea and gives up its hostility towards it,” he added.

The US State Department and the National Security Council are yet to comment on the North Korean diplomat’s remarks.

A State Department spokesperson had earlier urged North Korea to come to the dialogue table.

Just hours after the diplomat’s address, North Korea on early Tuesday morning fired one short-range missile into the East Sea.

The missile was fired from the North’s Mupyong-ri in Jagang province eastward at around 6.40 a.m., South Korea’s Joint Chiefs of Staff (JCS) said, adding the South Korean and US intelligence authorities are analysing the launch for additional information.

It did not however, specify if the projectile is a ballistic missile.