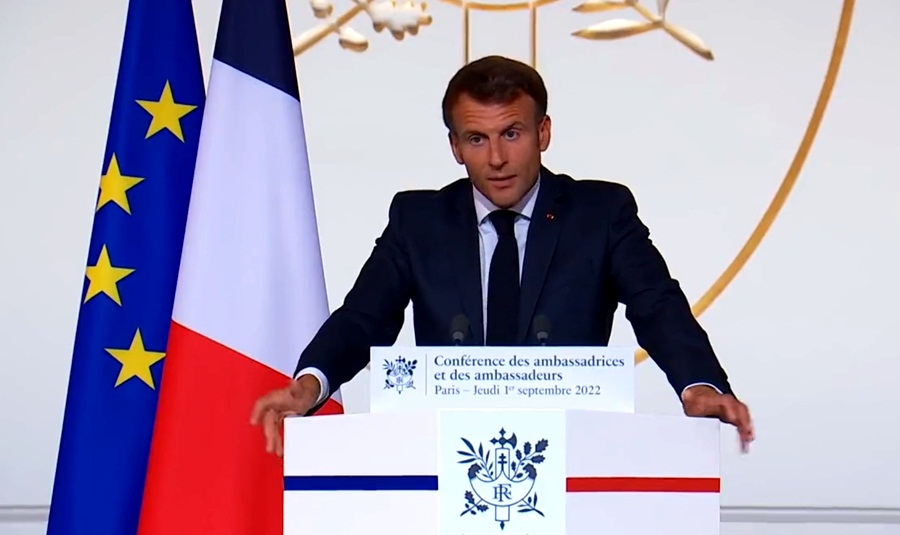 In recent years, there were many unpredictable incidents including the Covid-19 pandemic and the Russia-Ukraine war, he told the diplomats, adding that France alone does not have the means to resolve these crises, Xinhua news agency reported on Saturday.

The President said he aims to form a “stronger, more influential, more independent” France, and keep the country as a “balancing power” that builds peace and stability.

Speaking of European strategic autonomy, Macron told the French diplomats that the idea has become widespread across Europe.

“Above all, we have acted together, built a stronger Europe of defence, brick by brick. We have done so multilaterally and bilaterally. We have strengthened this European Union.

Macron acknowledged that the United States is an ally, but warned that “we do not want to depend on it”.

“France and Europe must therefore build this independence, which is also geopolitical. We do not have to be asked to choose how to guide our policy.”

He said that France should multiply efforts in multi-lateralism, especially in public health, climate change and biodiversity.

For public health, Macron highlighted “the usefulness of international health cooperation” through the World Health Organization.

“I think our role should be to consolidate the World Health Organization as the bedrock of a useful multilateral institution. We absolutely must consolidate the principles of information sharing, transparency and scientific independence,” he noted.

Macron also highlighted the importance of multi-lateralism on climate change and biodiversity.

In order to achieve the Paris Agreement, France should “convince our major partners among the developed countries, within the framework of the OECD (Organization for Economic Cooperation and Development), to make maximum emissions commitments per capita”, he said.

But “in the same logic of fair distribution of effort,” developing countries “must be able to find financing agreements for the energy transition in our common interest and on terms that are less costly than in developed countries”, Macron noted.

“We cannot ask emerging countries to move faster and to make the choice between development and climate, with financing conditions that are much harsher than in our country.