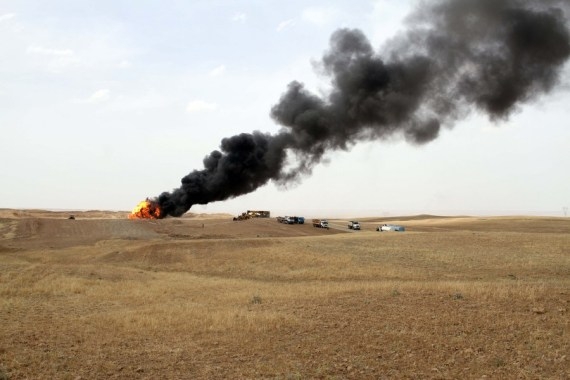 Baghdad : The Iraqi security forces killed five militants of the extremist Islamic State (IS) group during a three-day security operation in Iraq’s eastern province of Diyala, the Iraqi military has said.

Yahia Rasoul, Spokesperson of the Commander-in-Chief of the Iraqi forces, said on Wednesday in a statement that the Iraqi forces, backed by the country’s aircraft, launched a major operation on Sunday morning in Himreen mountain range in the north of the provincial capital Baquba, nearly 65 km northeast of Baghdad.

During the operation, the troops found 23 IS hideouts and killed five IS militants, seizing many weapons and equipment while the Iraqi warplanes conducted 14 airstrikes on IS positions in the mountainous area, according to the statement.

Meanwhile, Lt. Col. Raad al-Shammari from Diyala Operations Command told Xinhua that one of the operation’s goals was to track down IS militants who kidnapped Colonel Yasser al-Jourani, Head of a passport office in Baghdad, along with three of his friends several days ago while they were on a hunting trip in a rugged area in Diyala province.

Al-Shammari said the Iraqi forces found two bodies during the operation which were of al-Jourani’s friends, while the third is still missing, Xinhua news agency reported.

Rasoul confirmed in a separate statement that al-Jourani was also killed by IS militants after IS group claimed that its militants executed al-Jourani and posted a statement and pictures on the internet showing the killing of al-Jourani.

On December 26, the Iraqi security forces, backed by Iraqi aircraft, launched an offensive aimed at hunting down IS militants, destroying their hideouts and securing the mountain range of Himreen, according to a statement by the Iraqi Army.

Over the past few months, IS militants have intensified attacks on Iraqi security forces in the provinces where the militants previously controlled, leaving dozens dead and wounded.

The security situation in Iraq has been improving since the Iraqi forces defeated IS in 2017. However, IS remnants have since melted into urban centres, deserts, and rugged areas, carrying out frequent guerilla attacks against security forces and civilians.