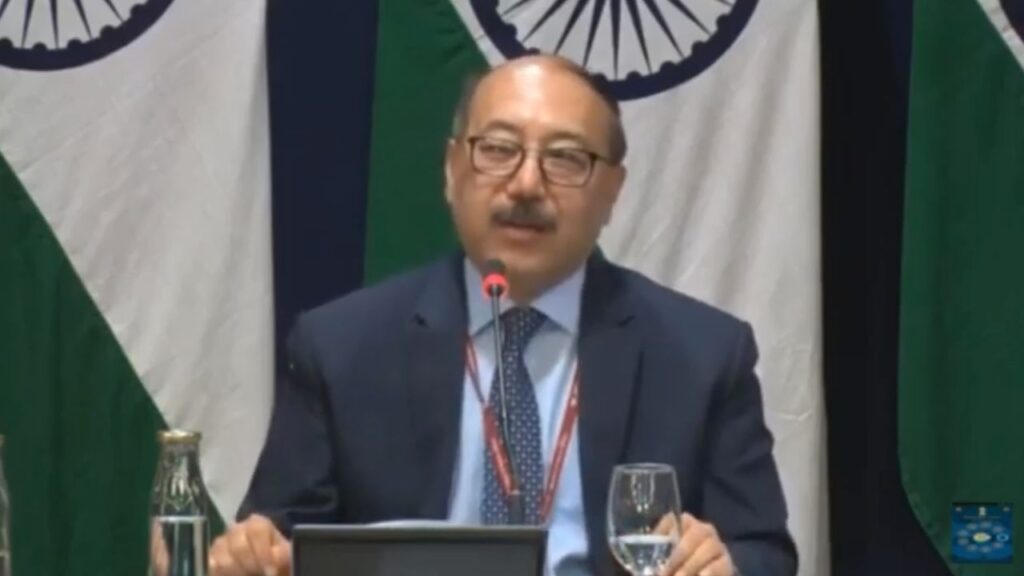 United Nations,  Raising an alarm about the emergence of cyberspace as a vehicle for cross-border terrorism by nations and terror organisations, India has called for international action to achieve a framework for global cybersecurity.

Outlining the dangers to international peace emanating from cyberspace, India’s Foreign Secretary Harsh Vardhan Shringla told the Security Council on Tuesday: “We need to adopt a collaborative rules-based approach in cyberspace and work towards ensuring its openness, stability and security.”

UN’s High Representative for Disarmament Affairs, Izumi Nakamitsu also warned of the risks from cyberattacks and said that situations could develop that “can encourage states to adopt offensive postures for the hostile use of these technologies”.

Because of this risk and the potential for “criminal groups and others” to create global destabilisation, she said that the Security Council should get involved in ensuring cybersecurity.

Shringla said: “The borderless nature of cyberspace, and more importantly anonymity of actors involved, has challenged the traditionally accepted concepts of sovereignty, jurisdiction and privacy.

“As a victim of terrorism, India has always underlined the need for member states to address and tackle the implications of terrorist exploitation of the cyber domain more strategically.”

Some countries “are leveraging their expertise in cyberspace to achieve their political and security-related objectives and indulge in contemporary forms of cross-border terrorism”, he said.

He added that cyber tools were being used to “compromise state security” through attacks on critical national infrastructure, including health and energy facilities and to “disrupt social harmony through radicalisation”.

Terrorists have used social media to plan and execute terror attacks and for “virulent propaganda” to incite hatred and violence, recruit youth and raise funds, he said.

Shringla warned of the dangers from malware that can “create potential flashpoints between states”.

“It is in the interest of the international community to ensure that all actors abide by their international obligations and commitments and not indulge in practices that could have potentially disruptive effects on global supply chains and trade in ICT (Information Communication Technology) product.

“There are widespread concerns that state and non-state actors are introducing vulnerabilities and harmful hidden functions, including through backdoor channels, into ICT networks and products.

“The Open-Ended Working Group (OEWG) on developments in ICT (OEWG) should be leveraged to find further common ground and improve upon the already agreed cyber norms and rules,” he said.

The OEWG, set up by the General Assembly in 2018, submitted its final report this March.

It did not recommend specific rules or regulations for adoption, but outlined areas of consensus and suggested further consultations.

Shringla spoke of the positive potential of ICT citing the role of the Co-WIN platform in India’s vaccination drive against coronavirus. He said that India was sharing it with partner countries.

The contrast between totalitarian countries like China, which he did not name, that have closed their cyberspace to outside influences and open societies like India came up in his speech when Shringla spoke of the vulnerabilities of nations that allow external cyber access.

While committing India to “an open, secure, free, accessible and stable cyberspace environment”, he pointed out that “open societies have been particularly vulnerable to cyber-attacks and disinformation campaigns”.

The dangers outlined by Shringla are widely manifest around the world.

In view of the dangers from ICT equipment being compromised with spyware, India has banned the use of some Chinese-made products.

There has been a proliferation of malware introduced into even computer systems used by the Pentagon.

Systems used in the US for petroleum distribution and for beef supply, as well as local governments, have been hit by cybercriminals to extort ransomware.

Washington has said that they operated from Russia.

Hospitals and health systems in the US and the UK have also been victims of cybercrime.

US Permanent Representative Linda Thomas-Greenfield said that countries should act against cybercriminals operating in their territories.

“Let me be clear: when a state is notified of harmful activity emanating from its own territory, it must take reasonable steps to address it. Given the transnational nature of cyberspace, this cooperation is essential,” she said.

Estonia’s Prime Minister Kaja Kallas, who presided over the meeting said: “Existing international law applies in cyberspace, with states accountable for any acts that contravene their obligations.”