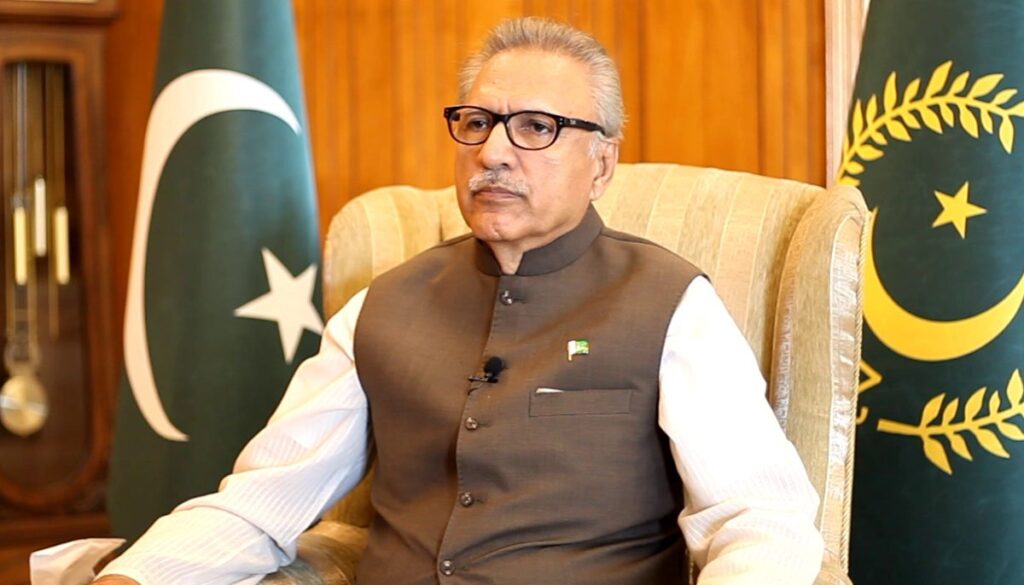 Islamabad,Pakistan President Arif Alvi has said that India is using Afghanistan’s soil to carry out terrorist activities in Balochistan.

The Pakistani President was speaking to the US media on various issues on Thursday. On ties between New Delhi and Islamabad, he said that Pakistan cannot move towards normalisation of ties with India it rolls back its August 5 decision to scrap Indian-occupied Kashmir’s autonomy, the Geo TV reported.

He commented on the Afghan Reconciliation Process, saying that the US’ decision to withdraw its forces from the war-torn country is a positive step towards peace in Afghanistan.

“Pakistan will try to persuade the Taliban to take part in the Turkey conference,” said the President.

On India’s involvement in terrorist activities in Pakistan, Alvi said that Pakistan has informed the global community of India’s designs.

“India is using the Afghan soil to meddle in the affairs of Balochistan and carry out terrorism there,” he said.

Alvi also said the relations between Pakistan and the US are improving.

He touched upon the topic of Pakistan’s internal affairs, stating that when it comes to reconciliation between the government and the Opposition, the matter of accountability is of primary importance.

“Due to the Opposition’s lack of cooperation, the government has failed to pass a lot of legislation,” he said.

Alvi said that he completely trusts the judiciary which is why the Justice Qazi Faez Isa reference was sent to the Supreme Judicial Council.

A couple of days ago, a session of the National Assembly was called during which a PTI lawmaker passed the resolution to debate on the expulsion of the French ambassador.

Violent protests staged by the proscribed organisation Tehreek-e-Labbaik Pakistan (TLP) triggered clashes which led to the deaths of four police officers, while 800 were wounded. One of the main demands of the TLP from the government is to expel the ambassador of France after French President Emmanuel Macron supported blasphemous sketches published by French magazine, Charlie Hebdo.

Following the clashes, the government held talks with the TLP and decided to submit a resolution in the National Assembly seeking the expulsion of the French envoy.

Alvi said that Pakistan is a democratic country and a resolution demanding the expulsion of the French ambassador is presented in the lower house for debate.

“I don’t have the right to say something which, under the garb of freedom of speech, injures the sentiments of others,” he said.