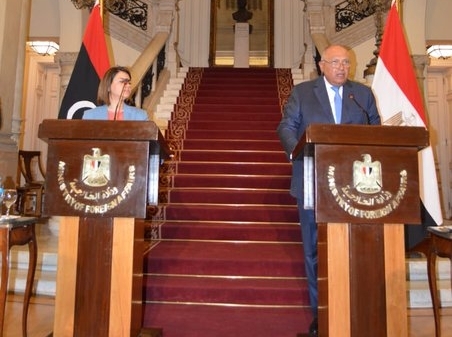 Cairo, Egyptian Foreign Minister Sameh Shoukry held talks with his visiting Libyan counterpart Najla al-Mangoush in Cairo on the latest developments of the Tripoli’s roadmap for a political settlement.

“I assert Egypt’s support for the interim executive authority represented in Libyan presidential council and the national unity government in performing their tasks during the transitional stage,” Shoukry told a joint press conference on Saturday following the talks.

The Egyptian top diplomat stressed the necessity of restoring security, stability, sovereignty and unity of the Libyan territories and “implementing all the stages of the roadmap for the political solution resulting from the Libyan Political Dialogue Forum”, reports Xinhua news agency

Egypt is looking forward to the Libyan general elections scheduled for December 24 and the expulsion of all foreign forces and mercenaries from Libya “without procrastination”, he said.

The Libyan parliament approved in March an interim unity government to run the country until the general elections held later this year which are expected to end a decade-long civil war that followed the ouster and killing of former leader Muammar Gaddafi in 2011.

Meanwhile, Al-Mangoush described the newly formed unity government as “the government of all Libyan men and women that seeks earnestly and sincerely to express the aspirations and hopes of its people”.

She valued Egypt’s support for the Libyan peace roadmap, noting the people of the two nations are connected with deep ties as well as a shared destiny throughout history.

“We also welcome the arrival of an Egyptian delegation (in Libya) to coordinate reopening the (Egyptian) embassy in Tripoli and consulate in Benghazi,” she said at the news conference in Cairo.